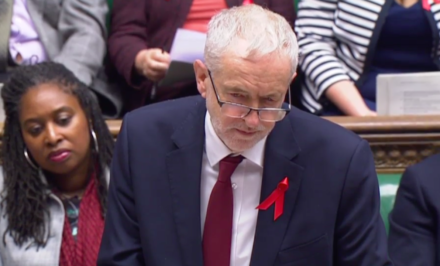 At Prime Minister’s Question today, Jeremy Corbyn skilfully picked apart the Tory Brexit deal currently on offer, which so far looks set to be decisively rejected by the House of Commons on Tuesday 11th December. His case against the deal, and her other judgment calls as head of this failing government, was peppered with clever and witty lines. Theresa May’s request for a head-to-head TV debate seems a worse idea each day that passes.

The first in his series of zingers, Corbyn pointed out that Theresa May cannot claim both that her deal is the only one possible and that it is the best. “The Prime Minister said, this is the best possible deal, it’s the only possible deal. It’s not hard to be the best deal if it’s the only deal. By definition, it’s also the worst deal.”

Next, the Labour leader highlighted that the big news story of the day – the Treasury forecast of the Brexit deal’s economic impact – is not based on an existing agreement on the UK’s future relationship with the EU at all. Because there isn’t one. Instead, it’s based on the Chequers plan, which has been dismissed by EU leaders. “The Government economic service forecast published today are actually meaningless because there’s no actual deal to model, just a 26-page wishlist.”

Philip Hammond did the media round this morning and appeared to fluff all his lines. In particular, the Chancellor admitted that the UK would be worse off under May’s Brexit deal compared to staying in the EU. This is, of course, obvious, but he’s not supposed to just go ahead and say it. It seems Hammond is now not allowed to do more public appearances – Labour is keen to note that he’s sending a junior minister in his place for John McDonnell’s urgent question. “The Chancellor said that her deal will make people worse off. Does the Prime Minister agree? He doesn’t appear to be here this morning to be consulted?”

In his best line of the session, Corbyn emphasised the main reason for which Brexiteer Tory MPs won’t back the deal and the extent to which the PM has crossed her own red lines. “All the Prime Minister can commit to is we will be working for frictionless trade. She’s gone from guaranteeing frictionless trade to offering friction and less trade.”

Onto Labour’s primary mission today: getting the government to publish its legal advice on the Brexit deal in full. A motion to this effect, which the Speaker assured MPs would be legally binding, was actually passed by the Commons. It said that the advice given by Geoffrey Cox, the attorney general, would be released without caveat or redaction for MPs to read. This publication would have to occur after the withdrawal document was agreed with the EU and a reasonable amount of time before the deal is put to a Commons vote. That would be now. But the government is ignoring a motion that John Bercow confirmed was “not just an an expression of the opinion” but “effective”.

Corbyn approached this issue by reminding May that she herself had demanded the publication of legal advice on the Iraq war in 2003. The leader concluded: “MPs need to see that advice, warts and all… She is now asking parliament to vote on the basis of a 26-page wishlist without even seeing the full legal advice.”