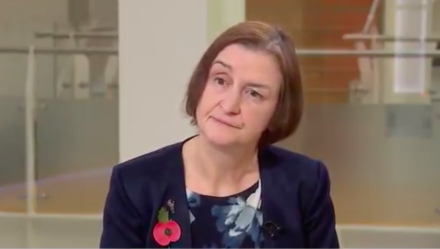 Nia Griffith today denounced Labour activist Aaron Bastani’s comments on the poppy appeal and called on him to retract them.

Earlier this week, Bastani said the poppy appeal was “grotesque”, “racist” and “white supremacist”. His video and tweets on the subject were criticised by deputy Labour leader Tom Watson.

Appearing on Sky’s Sophy Ridge on Sunday, the Shadow Defence Secretary described the comments made by the Novara Media co-founder as “nonsense” and “absolutely abhorrent”.

Griffith said: “I must say this person in no way represents the Labour Party.”

Asked whether Bastani should be expelled from the Labour Party, Griffith replied: “I would like him to retract on those comments, I certainly would. Whether he is to be thrown out is a matter for the party to consider.”

“The comments made are completely unrepresentative and an utter disgrace.” @NiaGriffithMP reacts to comments made by a Labour supporter that the poppy appeal is “grotesque” #ArmisticeDay100 #Ridge pic.twitter.com/KE2WBQzZiM