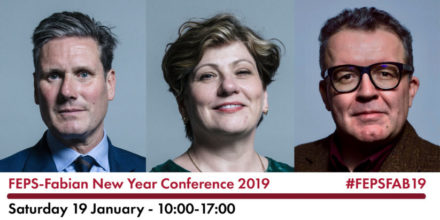 Tomorrow the Fabian Society will hold its 2019 New Year conference, Brexit and Beyond, where top Labour frontbenchers will be joined by backbench MPs, MEPs, campaigners and political commentators to discuss the next steps for Brexit and the priorities for an incoming Labour government.

Labour’s Brexit spokesperson Keir Starmer is set to deliver the keynote speech of the event, which comes just days after Theresa May’s Brexit deal was put to the the House of Commons and she suffered the worst defeat of any government in the history of British democracy.

Where next for Labour on Brexit? As Jeremy Corbyn presses on with setting out an alternative plan, party activists and dozens of MPs are pushing for the leadership to back a fresh EU referendum and others have shifted to endorse a ‘Norway Plus’ model. Starmer may be able to give attendees further insight into upcoming developments.

Deputy leader Tom Watson, who gave a much-praised speech during the no-confidence debate earlier this week, will also feature as a keynote speaker, and Shadow Foreign Secretary Emily Thornberry is expected to discuss populism in her closing speech.

Kicking off the panel debates, Richard Corbett MEP, leader of the European Labour Party, backbench campaigner Stella Creasy, The New Statesman‘s Stephen Bush and research fellow Ania Skrzypek will join Fabian chair Ivana Bartoletti to discuss the future of the left in the UK and Europe in the morning.

Other speakers throughout the day include Paul Mason, who will set out his views on defence policy, Stephen Kinnock MP on bridging divides across the country, the New Economics Foundation’s Miatta Fahnbulleh on building a new economic model and Grace Blakeley on climate change.

Wes Streeting and Anand Menon will talk about halting the rise of European popular nationalism in the afternoon, while Luciana Berger and Barbara Keeley explore mental health issues, and Kate Green and Lord Alf Dubs weigh in on post-Brexit immigration and refugee policy.

The full-day conference offers an opportunity for Fabian members and Labour activists to meet each other, debate policy and discuss the future of the party. LabourList is the media partner for the Fabian Society event this year, and will bring you all the day’s coverage here and on Twitter @LabourList.