Our politics has badly let our country down. We are lurching towards the edge of a precipice, weeks away from an economic shock that would profoundly shake everyday lives. Just as the pain is not instant when you fall off a cliff, it might not hurt so much on the way down. You might not believe what you read about motorways becoming car parks for lorries, blocked ports, medicine shortages, tomato shortages, and so on – although there is every objective reason to see that ‘Project Fear’ was in large part Project Fact. But what is certain is that the injury that we will be left with is a long-term contraction of the economy. That means fewer jobs. That means savaged livelihoods. That means a poorer standard of living. Especially for those who do not have the insulation of offshore tax havens, businesses domiciled in Singapore, second homes in the south of France or Tuscany. Having been brought here mostly via the neglect of de-industrialised small towns and coastal areas, we find Brexit making a lamentable situation worse. These are not the best days to be working in the Nissan factory in Sunderland.

How did we get here? Books will be written, and we know their outlines already. But let us pick out one part of the pathology of our politics: lazy labelling and splitting the difference. Our political culture is consumed by a tedious tendency to put groups of people into boxes and assume that they all think the same way. Perhaps it is part of the legacy of the marketing era of Blair/Cameron: politics as salesmanship; segmenting the market into sub-categories and tailoring your message to each segment. This is now taken by Theresa May to the ridiculous extreme of having entirely contradictory messages for each segment to which she wishes to appeal. Of course, not everyone is stupid and enough people see that she is lying and cannot be trusted by either segment.

In the past, the centrists in the driving seat of the Labour Party tended towards a split-the-difference approach. Prepared to be pragmatic, they calculated that compromise yielded support from broader portions of the political spectrum. It facilitated fantastic national progress. But the end result was a perception that they did not stand up for anything or anyone, lacking principles, lacking ideas, being slippery and untrustworthy. Readers will recall the reaction when many Labour MPs failed to oppose Tory welfare legislation. What is the point, if we are not standing up for the least well-off and most needy? There are certain things that no member of the Labour family should compromise, but some appeared to have forgotten what they were. They had convinced themselves that you always win from the centre, and so you should aim for the centre, no matter where that centre may be. Politics becomes a game – the art of the possible.

And so we got Jeremy Corbyn. While some voted for Corbyn because they agreed with him on every ideological position, for many there was relief at seeing a candidate with clarity of conviction. One who did not shy away from his principles, who got that the country needed a profound shift away from the cuts culture and ‘controls on migration’ mugs, who – above all – understood that politics was about persuasion, not just marketing. The era of triangulation was over, or so many hoped. It was time to move the Overton window to the left and recalibrate the centre. Politics became the art of making the seemingly impossible possible again.

It is with great sadness that we now see the discredited approaches still so prevalent in our movement. I am sick to death of hearing about liberal metropolitan elites. It is insulting to talk about people from Northern towns as if they all share the same opinion. It is as wrong to be dismissive of someone from Hampstead, because they must be a cosmopolitan snob, as it is to be dismissive of someone from Hull, because they must be hawkish on migration. Not every house with a long walk from gate to front door accommodates Tory voters and not every so-called working class person is a socialist. It does our politics no good at all to sneer at people before they have opened their mouths. It does our politics no good to put each other into silos and to ignore them. I fear there is no hope for a country where the “annoying FBPE lot”, the “Trots” and the “Stalinists” (also known as those loyal to the Labour Party leadership) cannot break bread together. And that is just on the left – division and disarray is everywhere.

We are not well-served by an approach that puts people in silos and assumes that opinions never change, that times do not change, that politics is not fluid. We are not well-served by an approach of splitting the difference and searching for some mythical centre-ground compromise that is tolerable to the most groups – everyone’s second-choice. A principled politics is a politics of persuasion. It recognises that we have more in common than the things that divide us and that, together, rather than focusing on our differences, we can and should rationally work towards what is in all of our best interests – or at least the best interests of the vast majority of people in this country who are working people (rather than rentiers). The many, not the few.

Where are the vast majority of Labour people? “Love Corbyn, Hate Brexit.” Given Corbyn’s position that the 2016 Brexit referendum result should be respected, how can this be explained? Perhaps it is because most Labour people understand that it is by the strength of our common endeavour that we achieve more than we do alone, and that together we can build a community in which power, wealth and opportunity are shared in the interests of the many and not the few. And that these foundational words of the Labour credo are as true internationally as they are domestically. Yes, the European Union, when influenced by a preponderance of centre-right national leaders, imposed austerity on Greece, has taken a morally questionable Fortress Europe approach to migration, and has leaned towards being a liberal club rather than anything more radical or socialist. But it is through working together and arguing for our values on the continental level that we can work towards creating a better Europe. As per the name of a vital campaigning organisation for our times: Another Europe is Possible. Outside it, we are voiceless and alone, not at the table.

Given that this position is held by the majority of Labour members, talk of a split in the party can only be greeted with despair. Apart from handing power to the shambolic and unworthy Tories for another generation, which can only be seen as a moral failing, where would most members go? Do they stick with a Brexit-y far left who wish to shrug off with disinterest the defining political, economic and cultural issue of the last few decades? Or do they embrace compromising centrists, some of whom were willing to sacrifice freedom of movement – that precious right of workers (rather than millionaires, who can move freely anyway) to spread their ambitions across an entire continent – on the altar of keeping markets (for everything except people) friction-free? The centrists may be more sincerely pro-European than the Corbyn-loyalists, but will they put people first? It is still Corbyn whose message resonates the loudest when it comes to remedying the root causes of the dire state of our country, from overcrowded schools to derelict high streets.

No, splitting is not the way forward to anywhere except a fresh Tuskian hell, crafted for us by the very worst in British politics. There is no divine right for the Labour Party to exist, of course. There is no divinely ordained reason for the party of the trade union movement to be also the party of Hampstead socialists. The only way is for the party to work together and stand up together for what we believe in. We are democrats but we are also socialists. We are the party that empowers the powerless, protects the rights of workers, stands up for ethnic minorities – and migrants are both ethnic minorities and workers. International solidarity and Labour’s historic mission have rarely been more relevant.

In offering to prop up Theresa May and get her deal through parliament if she accepts his terms and conditions for Brexit, Corbyn has gone beyond what many Labour leaders would be prepared to do. He has acted in what he considers to be the national interest. He has acted in the name of democracy, in the name of respecting the 2016 referendum result. While many of us may (with good reason) differ on the democratic wisdom or democratic necessity of honouring the 2016 referendum result, it is clear that nobody can accuse Labour of not having given it our best shot at making Brexit work. Nobody can justifiably blame Labour if and when Brexit collapses.

May has rejected Corbyn’s generous offer. So that is that. There is then no way through parliament, no compromise that will split the difference between ERG Brextremists, Paul Masterton-type Tories who have blunted their anti-Brexit positions to back their Prime Minister’s deal but will go no further towards an ultra-hard Brexit, pragmatic pro-single-market centrists, and those who won’t vote for any deal that will make their constituents poorer. It is time to stand up for our socialist and internationalist principles and to remember the lesson of Jeremy Corbyn: politics is about persuasion. Now that it is no longer a contest between a reviled status quo and a fantasy Brexit (or various fantasy Brexits, to the listener’s taste), let us persuade and campaign for a future that is better than whatever shabby offering May or the Brexiteers put up. Times have changed. Polls consistently tell us that opinions have changed. It is time to put it back to the people. It is not too late to stop our country and our communities from coming to harm. 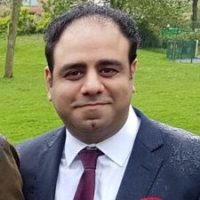 Peter Taheri is a councillor in West Hampstead ward, Camden.

View all articles by Peter Taheri