Brexit continues to dominate the political agenda. For almost two years, the political elite has been consumed by the ins and outs of our divorce with Europe – with little bandwidth for anything else. Amid the feuding over whether we should leave or not, and over the type of Brexit we should work towards, many have forgotten the message that was sent by Leave voters in 2016. Communities that were tired of being ignored and left behind made it clear that the status quo was not good enough and had to change. It was a simple demand for something better than an economy that does not work and a system that felt rigged against them.

Two years on and little has been done to meet this demand head on. Wage stagnation has continued. Child poverty is on the rise. Cuts in public spending continue to hit the poorest the hardest. The divide between the economic fortunes of London and the rest of the country has deepened. And Brexit is set make it harder, not easier, to deal with these problems. All the economic indicators point to the grim reality that Brexit will hurt our economy. The scale of the impact will depend on just how disruptive a version of Brexit we choose. But communities already under pressure from a decade of flatlining wages, squeezed living standards and cuts in public spending will struggle to cope with the fallout.

It is not just the economic cost that matters, but also the opportunity cost for reform. It is likely that we will leave the EU without settling the critical – but more contentious – question of our future relationship with Europe. As we seek to do this in the years to come, the fights that have consumed Parliament are likely to redouble and intensify – shrinking the bandwidth and political space to take on the bigger, more important challenge of transforming our economy.

When taking back control from Europe fails to deliver the pace of change that people want, the roar of discontent that erupted in the referendum will turn from Europe to a distant, feuding Westminster. This will create an urgency and political pressure for change. And in the absence of answers from Westminster, devolution may become the default response. Putting power in the hands of people who live in, work and understand the communities they are trying to help may be the simple answer to the complex question of how we close the economic divide.

Devolution of business rates, property taxes and land value tax could be combined with devolved funding and new powers over education, skills, employment support, immigration, housing, planning and local transport. This would give democratic local institutions – from local authorities up to combined authorities – the tools to take on the challenges in their local economy.

But in responding local leaders will need to do more than tinker around the margins and make incremental changes to the status quo. They must think differently about how to create a new economy from the local up. This will require an unrelenting focus on improving living standards rather than simply targeting growth in the hope that this will lift people up. It will mean driving an urgent green transition in places in a way that is just.

Giving people a greater stake and ownership in the local economy – using the investment and procurement power of local institutions to create alternative ownership models and local jobs. Delivering the basics that people rely on day to day – housing, energy, water, transport – through municipal corporations owned by and accountable to local people. Demanding more from local businesses in return for operating in their patch – good jobs, living wage and investment in community and social infrastructure. Finally, it will mean working hand and glove with the community to create new ways of doing things, tapping into the energy and ideas bubbling up from the ground.

And perhaps here lies a political project for Labour. For it was in Labour heartlands that the call for change was loudest and it is Labour that will suffer the political cost of not responding to its traditional base. There is a clear incentive for Labour to forge a radical new settlement in the wake of Brexit that gives power and control back to communities. In doing so, they may finally find answers to the all-important question of how we bridge the divide. 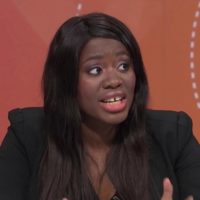 Miatta Fahnbulleh is chief executive at the New Economics Foundation.

View all articles by Miatta Fahnbulleh