The cause of Palestine has consistently dominated political discourse for years. Discussions of the injustices faced by the Palestinian people are always at the heart of the struggle for a Labour Party that puts people over profit, and that acts with principled solidarity on issues of global injustice.

When I spoke at Labour Party conference last year, I sought to relay just how important an issue Palestine is to young people, BAME communities and the left. The election of Jeremy Corbyn, for myself and many others, was such a revelation because he represented what most of us take for granted: that our country should be advancing freedom and justice in the world. Now we have launched Labour & Palestine to stand up and speak out.

For most of our lives, mainstream politicians have advocated a policy of continued weapons sales to oppressive regimes, collaboration with undemocratic governments and silence when war crimes are committed. Often these crimes take place in the countries from which our parents left as refugees or migrants, so we hear daily about the impact these policies have. This is one reason why young British Muslims, and BAME communities more generally, have felt so disenfranchised from politics and alienated on the real issues we care about.

In this regard, Palestine is very special to us. Part of the story is the religious symbolism surrounding the city of Jerusalem (home to one of the three Holy Mosques in Islam) and the plight of many of our fellow Muslims (the brutal bombardment of Gaza in 2014 being a recent, painful example). For most, however, Palestine is not primarily a ‘Muslim issue’; but rather, a basic issue of humanity and justice. When a politician, despite the backlash they will suffer, remains steadfast on the side of the Palestinians, we know they will stand for us, and will remain true to their word on what we really care about, on issues such as Prevent, Grenfell and Windrush.

BAME communities have long lacked representation, but Labour can now change this and provide an open and inclusive platform. This has to start by acknowledging that the spectre of colonialism still haunts many BAME communities, and defines both Britain’s historical relationship with the world, as well as the current one. To address this, the Labour Party must embark upon a programme of education and awareness raising, around Britain’s colonial history, and the struggles of the Palestinian people – including historical events such as the Nakba, that are constantly wiped out of discussions around the injustice the Palestinians face. It is only in ignorance, and active silencing and constant suppression of this history, that Labour has been able to support neo-colonial policies over the years, from Palestine to Afghanistan to Iraq.

Colonialism is a powerful force that marginalises, silences and discriminates, specifically against Britain and Labour’s BAME communities. Our communities must be listened to, because we have truly understood and still suffer from the effects of colonialism, so can speak not only of ‘the policy options’, but about the real cost of those policies in terms of death, destruction and suffering. As a party, we cannot allow these injustices to continue or pretend that they have nothing to do with us, firstly because it is immoral, and eventually because it will result in swathes of BAME members and voters leaving the party in droves, as happened following the tragedy of the Iraq War.

The Labour Party exists to serve the many – both here and abroad – who suffer from injustice and oppression. The Palestine motion at conference was just the start of the thoroughgoing change our party must undertake. We must further our efforts in raising awareness around the struggles of the Palestinian people, the historical factors that caused these tragic circumstances, and fight to change the terrible injustices they still face. At the same time, we must also condemn the brutal actions of the Israeli government, and halt arm sales to this expansionist and abhorrent regime that repeatedly breaches international law.

The conference motion is only the beginning, and it opens the doors to the emancipatory politics we need to see more of. Having embarked upon this monumental change, we know there is much more still to be done to realise the justice and freedom our Labour Party is working so hard to achieve, for the many in Britain, and the disadvantaged across the world. 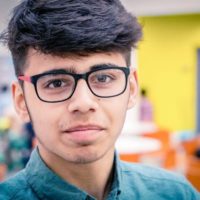 Mansoor Ayub is the Wycombe CLP BAME officer and an undergraduate student in Politics and English Language at Aston University.

View all articles by Mansoor Ayub