For a long time, but particularly in recent years, there have been two all too commonly-heard views heard within our movement. The first is something like: “Antisemitism in the Labour Party is not a serious problem, and is being weaponised to get rid of Jeremy Corbyn and the left.” The second is something like: “The left are a bunch of antisemites, and left-wingers cannot be trusted on antisemitism.” No nuance – that’s it.

Some of us have become increasingly frustrated with the generalisation and lack of common sense on these issues, and felt that there was no group within the party willing to say, “Yes, there is a serious problem of antisemitism within the Labour Party”, but at the same time, “Yes, sometimes people have wilfully misused the term and not been pulled up on it”.

We got ourselves together in a discussion group, and before long, rather than just moan among ourselves, some of us started up a Facebook public page followed by a Twitter account. We are not a Jewish group – in fact, we are almost equally divided between Jews and non-Jews. We are all left-wingers in our politics, and all Labour members. We feel that, as left-wing socialists, we are uniquely well-placed to play a role in helping the party, and society as a whole, to root out the age-old evil that is antisemitism.

Antisemitism is, of course, a form of racism. We are very active in generally anti-racist causes, our banner for example being seen on the big anti-Tommy Robinson demonstration in London not long ago. As socialists, we feel it is vitally important to campaign against the prevalence of conspiracy theories as a convenient way of apportioning blame for society’s ills. Blaming members of a particular ethnic group, quite apart from being racist, completely fails to offer a class analysis of society, which is crucial to any true understanding of what needs to be done to create a society that is fair to all of us.

One of our earliest activities since the public page was launched half a year ago was to help organise demonstrations against the conspiracy theorist and former footballer/journalist/Green Party spokesperson David Icke. This saw us work with both the Jewish Labour Movement and Momentum. We felt that this was important, as Icke has been filling halls with his Nazi-derived imagery and rhetoric for decades without being faced with serious opposition.

Members of Jewish Labour Movement joining the protest tonight against the premier David Icke’s film. Icke is a racist conspiracist who draws on Nazi propaganda pic.twitter.com/nYYLRSK8Af

We also worked with the JLM, Momentum and Jewdas to demonstrate against the Holocaust-revisionist, self-proclaimed “self-hating” Jewish saxophonist Gilad Atzmon at a recent gig. However, what we want to do above all is help in the process of education about what antisemitism is, where it occurs, what different forms it takes, which public figures have crossed the line into antisemitism, what its history is.

To that end, we have also set up a website, www.saasuk.org. Here you will find articles that deal with some of the important issues involved, and we intend to keep the articles coming. You will also find on the website specific examples of antisemitic behaviour from social media.

As we have taken a position that is distinct from those of the two main Jewish groups within the Labour Party, JLM and JVL, debate on our public page can be extremely lively at times. We welcome dissenting views but we do not welcome abusive ones or those engaging in the kind of racism that we have made it our business to oppose. It is likely that in the future we will become an organisation with elected officers and no longer just an online group, and one that appears at events, but our online presence will continue.

We are entirely distinct from Labour Against Antisemitism, who have a completely different outlook from us and have in our view wrongly accused some Labour Party members of being antisemites when those members are actively involved in opposing all forms of antisemitism (although they have been correct at times too, of course).

The public page was founded by me, and I work with a group of, at present, six other admins. I have been a constantly active Labour Party member for 41 years and was shortlisted to stand in the Richmond Park by-election for Labour in 2016, receiving the support of Red Labour and Momentum. I’m now 59 and looking forward to a time when all our members fully understand the importance of these issues and to the day, not long off I hope, when we are in power again.

We look forward to working with other socialists in this fight against antisemitism, and welcome contributions from those who also wish to see the scourge of racism removed from both the Labour Party and society as a whole. 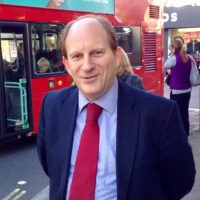 Barnaby Marder is the founder of Socialists Against Antisemitism and a former Richmond Park Labour chair.

View all articles by Barnaby Marder