Today, Labour has pushed the government to declare an environment and climate emergency. But if it’s to be more than words, what does this mean? The recent actions of Extinction Rebellion and the school climate strikes highlight that young people get this. After all, it is their futures that hang in the balance if we get this wrong. We owe it to them now to put in place the measures that can secure their futures.

The message of 16-year-old climate activist Greta Thunberg is that our common house is on fire. We should be making every effort, in all of our interests, to put it out. This is a real wake up call to those who think we are doing all right on climate change and do not need to move upwards through the gears.

Labour now has in place the plan that really can make the radical cuts in emissions we need whilst keeping our industries and jobs working well and producing a positive effect on people’s lives and security. We are calling it a Green Industrial Revolution – a programme that will invest in and coordinate Britain’s industries and workforces to create the new low carbon green economy, rather than hanging on to old high carbon ways of doing things.

It will involve significant investments in clean low-carbon and renewable energy, in saving energy losses from our presently poorly insulated homes up and down the country, in equipping our industries with carbon capture and storage to enable them to keep working on a low carbon basis, renewing our forest and woodland cover, cleaning up polluted air, reducing bills and giving more people the opportunity to walk or cycle. We want the UK to manufacture and install all of the components needed for this new low-carbon green economy which will create hundreds of thousands of new secure jobs, and a major boost to the economy of undertaking this work.

But combatting climate change is an international task and obligation – the world must work together to give us a chance to stabilise our global temperature rises and keep our only planet fit for human and natural habitation. Britain has been in the forefront of efforts to get international action coordinated and the last Labour government passed the world’s first Climate Change Act, since replicated in countries across the world.

What Britain does on the global stage matters. Through the UN, Britain has been lobbying other countries to do their part, culminating in the Paris Agreement where 192 countries agreed to limit their emissions together. Of course we need countries to go further and faster, but we can’t ask them if we’re not doing this ourselves and leading by example. By rapidly developing the technologies and services that will get us there, the UK can also harness the export opportunities climate change can bring. Now we have declared a climate emergency, we need to act to decarbonise our economy at pace, pursing the gold standard of climate change action. 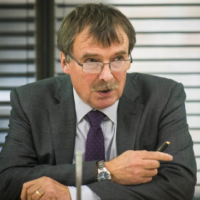 Dr Alan Whitehead is MP for Southampton Test and shadow minister for energy and climate change.

View all articles by Alan Whitehead