“Brexit is culture war” has become a cliché repeated in Labour circles and beyond. Such statements usually carry an implication: that Brexit is a mere distraction, dragging us away from class politics. But it’s easy to forget that culture wars have their victims too, most of whom are working-class people – whether the fight is about LGBT rights, women’s rights or, in this case, about immigration and freedom of movement.

Immigration was front and centre of the Brexit debate in the lead-up to the referendum. We saw Nigel Farage’s infamous posters, which will go down as a shameful moment in our history. We heard the same myths repeated over and over again about migrants’ impact on wages and public services, when we know that evidence points otherwise, and that the Tories are to blame. Finally, we witnessed a wave of hate crime against not just foreigners but also British-born people of colour who got told that they don’t belong in the Brexiteers’ utopia.

Today, just over three years after the Brexit vote, millions of EU nationals still find themselves in limbo. Those who arrived in the UK under freedom of movement are now being forced to apply just to be able to stay in their homes with their loved ones. We hear stories of people who spent years and decades living and working in Britain, now having their settled status applications rejected by the Home Office. If the Tories have their way, soon millions more will be subject to the same hostile environment that brought us the Windrush scandal.

In the face of this injustice, Labour must show that we take our anti-racist values seriously. We cannot let migrant workers be an afterthought in the Brexit process. Polish nurses or Romanian cleaners are just as much a part of the working class as their colleagues with British passports. The labour movement must take responsibility for defending their rights, not turn its back when most needed. But this also goes beyond Brexit, and that’s why I’ve called for a general amnesty for the 300 asylum seekers in my city of Glasgow, whose forced eviction is due to begin next week despite ongoing legal challenges.

Free movement is a class issue. Any kind of “skills”-based system that the Tories want to install instead would inevitably favour wealthier migrants over poorer ones. The proposed minimum income requirement of £30,000 a year would not only deprive the UK of talent that keeps our economy afloat. It would also mean that living and working legally in Britain would become a privilege awarded to the lucky few, not the many. Replacing free movement with visa schemes would also give more power to exploitative employers and undermine efforts to unionise workers fearful for their immigration status.

Our solidarity must also extend beyond the borders of Europe. As we rightly condemn, in the strongest possible terms, Trump’s cruel migrant camps, let us not forget that the US is not alone in separating families and locking up asylum seekers. Thousands of people in Britain are imprisoned indefinitely in detention centres, for no crime other than their nationality. Many more are at constant risk of destitution because of the “no recourse to public funds” condition often attached to visas, barring migrants from the safety net of the welfare state. Meanwhile, refugees continue to die at sea as the EU – under pressure from the far right – cancels rescue missions and invests in strengthening its external borders instead. Whether on a national or European level, Labour needs to oppose this inhumanity and fight for an immigration system that puts human rights first.

That’s why I endorse the Labour Campaign for Free Movement – a network of Labour activists united in campaigning for freedom of movement and migrants’ rights, regardless of what happens with Brexit. We encourage Labour members to join the campaign’s national meeting this Sunday July 7th in London and help build the movement we need to transform our immigration policy. We cannot give an inch to the xenophobic right and their divisive narratives. Instead, let’s stand united in saying: migrants are welcome here. 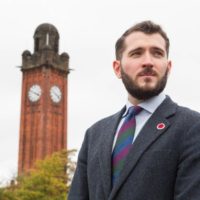