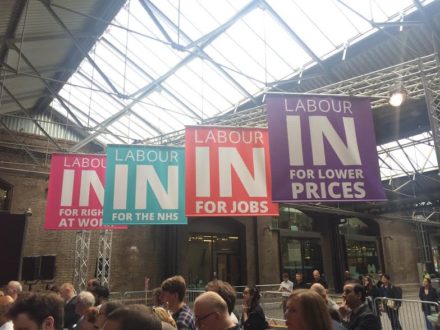 As voters head to the polls, we have some time to reflect on the months of great drama generated by the EU referendum. There have been some insightful, powerful and funny moments, with, of course, one event of great sadness: the death of Jo Cox a week ago.

While we sit back and wait for politics to settle after a strained final stretch, we have rounded up some of the highs and lows for Labour from the campaign trail.

David Miliband: it’s “political arson” to take the UK out of the EU.

The Labour darling and former Foreign Secretary made the case early on for a Remain vote – saying leaving would be a voluntary abdication of power. Whilst an important speech because of Miliband’s experience, it also signalled some temporary unity within the party – all wings of were fighting for an In vote.

Corbyn’s “warts and all” speech

Corbyn took up the mantle of pro-EU campaigning but, instead of showing unbridled support for the bloc, he placed himself far closer to the majority of voters by acknowledging the weaknesses as well as the strengths of Europe.

When some on the left are sceptical of the EU’s progressive credentials, Corbyn’s voice has hopefully helped to reach those on the left who considered leaving.

Corbyn on Cameron: “We are not on the same side”

Jeremy Corbyn made a shrewd move early on by refusing to share a platform with David Cameron over the course of the campaign. He said the pair have radically different visions of why the UK should stay in the EU, and he would make the Labour case to remain by supporting a “social Europe”, rather than the free market elements of the bloc.

In one move, Corbyn managed to separate Labour from Conservative infighting as well as showing he had learnt the lessons of the Scotland referendum, where Labour MPs were punished for lining up alongside the Tories.

Khan and O’Grady in the BBC’s Great Debate

The flagship debate in the final week of the campaign saw London Mayor Sadiq Khan and TUC General Secretary Frances O’Grady on the front line of defending Remain.

O’Grady’s prime position in the debate was to put workers’ interests front and centre. She also increased the number of women’s voices in the debate – which, at least for the first few months, was dominated by men in the Tory party shouting at one other.

In John McDonnell’s repeated warnings of a Tory Brexit, Labour founds a slogan to match the Leavers’ “take back control”. The shadow Chancellor offered a stark assessment of what June 24 could look like under a Conservative Government: Britain would see a renewed mandate for austerity, attacks on wrokers’ rights and deeper spending cuts in the face of a recession.

Few national campaigns now pass without an inspirational speech from Gordon Brown. The former prime minister took up the mantle of passionate pro-europeanism with his call to Lead, Not Leave the EU. He took up the big arguments to stay, giving patriots, sceptics and Labour supporters reasons to vote Remain.

Known for his “laid back” look, Corbyn managed to amuse the public by donning a fake fur coat and arriving at Channel 4 in a Bentley. While Corbyn’s appearance on The Last Leg didn’t go terribly, it underscored the challenges for the Labour leader in communicating his message. While the Labour leader shouldn’t rule out comedy broadcasting in the future, he should probably prep a few more jokes beforehand.

Boris Johnson versus the public

Boris Johnson was occasionally jeered during the BBC debate on Tuesday for ducking questions and simply repeating the mantra to “take back control”. It was his answer to questions on how much immigration the UK would see, rather than responding with actual numbers. Both sides of the tiff are guilty of stifling factual debate and, whilst Boris was clearly avoiding saying anything of substance, he should have been given the chance to get his point across.

The public has had to sit through some blatant lies from leave campaigners, including the claim that membership of the EU costs Britain £350m a week. The stat was rubbished by the UK Statistics Authority although the Leave campaign refused to withdraw the claim.

Outers have also peddled the myth that Turkey is about to join the EU, even though member states have the right to veto new entrants and no one in the EU wants to move its border to Syria.

The Leave campaign also embraced dishonesty when Vote Leave sent out leaflets posing as a neutral information leaflet rather than campaign materials.

Michael Gove epitomised the Brexit approach to facts when he said “I think people in this country have had enough of experts.”

A departure from truth in politics means resorting to gimmicks. UKIP really took style over substance to the next level by taking a bunch of boats up the Thames to protest fishing regulations.

In a bizarre twist, however, the flotilla was met by rival boats from the In Crowd and Momentum urging voters “Don’t let Farage sink Britain”.

The UKIP leader showed the world a callousness when he unveiled the “breaking point” poster.

His depiction of refugees as a threat, and implying those seeking asylum were heading to the UK, when they were actually pictured at the Slovenian border, prompted a huge backlash. 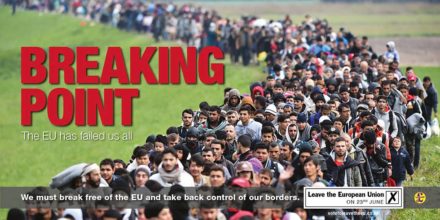