In less than two weeks, we could be witnessing the crowning of a Boris Johnson premiership. With his recklessness, power hungry nature and unpredictability, now is the time for the Labour big hitters within the shadow cabinet to swing enthusiastically behind the campaign for a public vote. More than ever, we need them to back ‘Remain and Reform’ for the sake of the less well off.

On Sunday, we go to Johnson’s constituency of Uxbridge and South Ruislip – an area where my parents grew up and that is not well represented by the local MP. A very welcome revelation is that Emily Thornberry, Shadow Foreign Secretary, will be joining us at the rally to outline the new Labour Party policy. She will reiterate that Labour is campaigning for a public vote and Remain against any Tory deal or a no deal Brexit. Yet another welcome surprise is the news that John McDonnell will be joining us at Open Labour’s parliamentary event on Monday night. Activists like myself are hopeful that Emily and John will go beyond their scripted remarks and give us some improvised additions, as was the case with Keir Starmer’s memorable speech at Labour conference 2018. After all, it is clear that even now the Labour leadership still has some wiggle room in their new position to attempt to negotiate their own Brexit deal.

Let us not forget that, as the government’s assessments show, any kind of Brexit will have a profound and negative impact on the vulnerable communities we strive to represent. Johnson’s assumed win increases the likelihood of no deal because he uses it to play to the Tory selectorate. With that in mind, it is worth emphasising a key message from Labour for a Public Vote’s upcoming ‘no deal’ briefing: that no deal means the UK would lose all of its existing trade deals overnight and would consequently experience a recession “worse than the 2008 crash”, with our economy losing 8% of GDP in a year.

I mention this because at the grassroots we’ve been working hard with party members to ensure that Labour’s policy is unequivocally in favour of Remain and reform. This is the only way to guarantee the implementation of our socialist principles both at home and overseas, through international solidarity. Over 80 CLPs have already passed a motion in this spirit or are due to discuss one to go to conference in September, with more CLPs joining that number all the time.

This desire for policy change within the membership has at last been recognised with movements from the leader’s office. High-profile shadow cabinet members like Emily and John now have the opportunity to promote this policy change, as we will be doing on Sunday. What remains to be seen is how many shadow cabinet members will do engage in promoting this shift with enthusiasm. In many ways, the nuance in policy doesn’t matter to the average voter quite as much as the optics of prominent Labour figures leading and being passionate about the cause for Remain. This is particularly important for figures who are trusted by the left, who control many of the structures from top to bottom in our party and who largely determine where policy and party resources go.

The active participation of prominent opposition frontbenchers in the cause could make all the difference, as parliament and the country are increasingly getting behind the idea of a confirmatory vote on our relationship with the European project. If we want to ultimately achieve a win on this, figures like Diane Abbott and even Jeremy Corbyn must be at front and centre of the cause for a public vote in the same way that Emily is. They, crucially, have shown that they recognise the reasons for which people voted Leave in 2016; why many people’s social and financial situation under the Tories couldn’t get much worse; and why an economic gamble and hit to the establishment might be worth a punt. Bringing these politicians to the forefront of the campaign enables that message to shine through, while also recognising that the reality of Brexit has been shown to be an unstable project that only enables the far right. Doing so will enable us to reinvigorate our socialist principles of looking out for working-class people and achieving the change that we so desperately want to see both in the UK and on an international scale.

This, combined with Labour’s enthusiasm and grassroots campaigning machine shown in the 2017 general election, could quite legitimately put Corbyn in a decent position to be in 10 Downing Street very soon.

What this brings us back to, of course, is the prospect of a Boris Johnson crowning – and with parliamentary deadlock on Brexit, the potential for another early general election. The rally in Uxbridge with Emily on Sunday could be a notable step towards a historical Labour gain from the Tories in that constituency. Suitably enough, McDonnell’s constituency of Hayes and Harlington neighbours it. It is time for all shadow cabinet members to help us shape and lead the movement they now support by taking their place at the front and centre of the campaign. Let’s see you join us on the doorstep as we reach out to Leave voters and convince them of the case for remain and reform. Uxbridge is only the beginning. 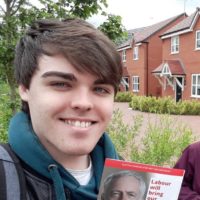 Patrick Jenkins is the London regional organiser for Labour for a Public Vote.

View all articles by Patrick Jenkins