Tonight, the Parliamentary Labour Party will come together, as they regularly do, to discuss and debate key issues. But this is no ordinary meeting, and nor should it be. This PLP meeting comes off of the back of horrendous local election results, where Labour – despite being the main opposition to one of the most chaotic and damaging Tory governments for decades – suffered a net loss of councillors. These were shortly followed by European elections, where we had our worst showing since 1912, when the Labour Party was formed.

Recent polling from YouGov suggests that if Labour continues with its current position on Brexit, the Lib Dems – who helped to inflict Tory austerity on the country for five years – have a better chance of getting in government than us. This shows that we are nowhere near where we need to be in order for us to deliver the Labour government that this country so desperately needs.

There are many reasons for our poor showing in the polls, which people could spend a long time arguing about. But from my position as an elected representative of thousands of students and young Labour members, one thing is clear. Our Brexit position is not working. We must be better – we owe that to those who vote Labour because their lives depend on the Tories being kicked out of power.

It was right to try to bring together different parts of the UK, no matter how they voted in 2016. I strongly believe that the Labour Party is the only party that is in a position to do just that. For a short while, this approach worked. The 2017 election showed us that when the country could – and rightly did – focus on non-Brexit issues, particularly the devastating consequences of Tory austerity, Labour’s message cut through.

But that strategy no longer has any credibility. First, because our politics has now been deadlocked for over three years. Brexit has chewed up every single thing that any government – Labour or otherwise – could and should have been workin on. It’s become increasingly clear to the public that without a way forward on Brexit, there is no way forward on anything else.

Every day that we spend mired in this Tory soap opera is another day lost on tackling knife crime, the climate crisis, underfunding in our schools and hospitals and systematic oppression in our society. And speaking of inaction, this leads us to the second reason all Labour MPs must support the campaign to Remain: Boris Johnson. There is nobody less suited to being Prime Minister. His catalogue of grossly offensive statements against Muslim women, black people and the LGBTQ+ community should disqualify him from running to be a parish councillor, let alone leader of this country.

And yet the Conservative Party membership – who make up 0.25% of the electorate, with an average age of 57 and three quarters of whom are lucky to be in the highest socio-economic bracket – have the power to make it so. This entirely unrepresentative group of people will apparently give a mandate to Johnson for a disastrous no deal. This will disproportionately hit the poorest hardest.

Even if this wasn’t the case, Labour continuing to stay on the metaphorical Brexit fence is intellectually dishonest. We know that Brexit will hit communities that Labour was created to support the most. We also know that in every single one of the Labour MP’s constituencies who will be at the PLP meeting tonight, the majority of both Labour voters and their electorates all back a People’s Vote. As do the overwhelming majority of Labour members, and in particular young Labour supporters. I urge all Labour MPs tonight to say proudly and in one clear voice: we demand a People’s Vote and for the Labour Party to campaign for Remain. 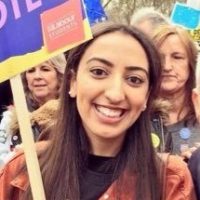 Rania Ramli is chair of Labour Students and a supporter of For our Future’s Sake.

View all articles by Rania Ramli