In the centrist imagination, “populism” is understood as a caustic, anti-democratic and reactionary aberration on “normal” politics – a base, demagogic and impulsive assault on the pragmatic and sensible. When Corbynism is described disparagingly as “populist” by its opponents, it is done so in order to collapse the antagonisms that Corbynism articulates into the chauvinism of Nigel Farage and Boris Johnson. Rather than abandon this political frontier to the far-right, figures such as Chantal Mouffe and Jean-Luc Mélenchon have attempted to provide the antidote to far-right mass movements with a theory of “left populism”.

In an October 2016 dialogue between Mouffe and Mélenchon, both figures identified contemporary politics as being in a “populist moment”. This claim is vindicated year by year. Even Brexit – a political confrontation perceived in the liberal common-sense as a battle of populism against reason – is ultimately a confrontation of two competing conceptions of “the people” in this populist framework.

For the People’s Vote campaign, “the people” represents a people who were misled in 2016 and want a final say on whether Britain should leave the EU; for Eurosceptics, parliament must deliver “the will of the people” as delivered in the 2016 referendum. Any comprehensive analysis of contemporary politics would suggest that there is no apparent assault by the arrayed forces of populism against “sensible” established politics, but that politics has developed into competing notions of “the people” and how the political frontiers of these competing conceptions relate to and advance conflicting interests within society.

During her 2018 appearance at The World Transformed, Mouffe identified a left-populism in the movements of both Jeremy Corbyn and Jean-Luc Mélenchon. To Mouffe, both of these politicians have paved the way for a left-wing politics that rejects a neoliberal, centre-left “there-is-no-alternative” model and instead articulates new antagonisms. Similarly, Mélenchon claimed in a 2018 New Statesman interview that the “red thread” uniting himself and Corbyn is that they both represent a “people’s will to take back control of their situation when faced with bankrupt parties, institutions and figures”.

While this development of left-populism is of intellectual interest to Corbyn’s allies and opponents alike (Mouffe’s event at The World Transformed was, after all, hosted by Jon Trickett, widely seen as a key figure in the development of Corbynism), a fundamental difference looms over their two movements (and has loomed over Corbyn ever since his election in 2015). Mélenchon launched La France Insoumise independently of the established Parti Socialiste and Front De Gauche (even claiming to reject the party form entirely), whereas Corbyn has inherited the leadership of a political party that has in large parts engineered the neoliberal consensus against which Corbyn’s rise has been defined.

These differences in circumstances (including, vitally, a parliamentary party of which 77% would demand his resignation in 2016) between Corbyn and Mélenchon provide a lens through which to understand the strategic decisions that have driven the demands of Corbynism compared to those of Mélenchon. Where Mélenchon’s rallying cry of “Qu’ils s’en aillent tous!”, to replace an entrenched establishment with, in concrete policy terms, a constituent assembly to establish a “Sixth Republic” of decentralised control and the abolition of the “Presidential Monarchy”, the shared element in Corbynism has been suffocated by the institutions it is channelled through.

This dynamic populist demand, articulated by Mélenchon through a desire to completely remake the French state from “the people” up, exhibits itself in Corbynism through the relatively gradual, procedural and legalistic process of reforming reselection processes. Despite the shared values of democratisation and of a mass membership wrenching control from those with entrenched positions (and the strategic concern of Corbynism to transform the Parliamentary Labour Party), the party structure that Corbynism finds itself channelled through is ultimately limiting to the scope of this demand.

Mélenchon’s left-populism also finds itself in fundamental opposition to what he perceives as the global institutions of neoliberal capitalism. Mélenchon himself is an unapologetic Eurosceptic, with a consistent opposition to any centralisation of power to the European Union, and includes the withdrawal of France from NATO as a component of remaking the French state as one removed from the maintenance of neoliberalism. Corbyn, alternatively, has inherited the leadership of an imperialist party to which NATO owes its very existence.

What has ultimately limited left-populism in Corbynism, where it has been uninhibited in the politics of Mélenchon, is how instinctively the movements can oppose establishment politics. In the 2017 Presidential election, Mélenchon won a plurality of voters who had not previously identified with any political party. What can be seen as the raison d’être of a left-populist movement – to bring the politically disenfranchised into a left-wing political movement representing a serious threat to the dominance of capital over society – is treated within the relatively establishment Labour Party with a degree of scepticism.

Mélenchon himself is not without shortcomings. His claim that the working class are necessarily the most advanced section of “the people”, combined with the increasing degree to which precarious migrant workers and ethnic and religious minorities constitute the modern working class, requires reconciliation with his self-described patriotism and support for banning the burqa following his radically patriotic interpretation of laïcité. Nonetheless, Mélenchon provides a template for us to understand the compatibility of a truly radical, anti-establishment structural analysis with a popular left-wing mass movement. 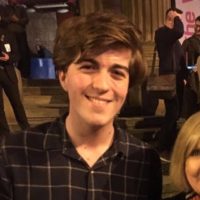 James McKevitt is a Labour activist and member of Lancaster University Labour Club, Lancaster and Fleetwood CLP, Unite and Momentum.

View all articles by James McKevitt