While the whole of the Palestinian population is living in restricted and dangerous circumstances in the occupied West Bank, Gaza strip and East Jerusalem, it is the workers who bear the brunt of Israel’s constant assault on their lives and basic freedoms – from denial of their rights to movement, enforced by checkpoints and the apartheid wall, to the direct violence experienced by health workers in the borders of Gaza. Palestinian workers also suffer from the crippling unemployment caused by the military occupation implemented by the Israeli state.

As trade unionists, we must stand up for the collective rights of the Palestinian people in the spirit of internationalism that defines our movement. We believe in fundamental rights, justice and equality for all, from factories and workplaces in the UK to the fields and hospitals in Palestine.

Over the past few weeks, we have seen a strong show of solidarity between the UK labour movement and the people of Palestine in their struggle for freedom. This is something we should be proud of.

Earlier in September, TUC Congress passed a strong motion in solidarity with the Palestinian people entitled “Palestine – supporting rights to self-determination”. It was moved by the Artists’ Union England and seconded by PCS, and was carried overwhelmingly on September 11th.

The motion notes: “The US and Israeli administrations are destroying prospects for peace in Palestine – by recognising Jerusalem as Israel’s capital, stopping funding for Palestinian refugees, the continuing siege of Gaza, expanding illegal settlements and plans to annex illegally large areas of the West Bank. Trump’s “deal of the century” is an attempt to destroy core Palestinian rights.”

Supported by speakers representing a number of major national UK trade unions, it calls for full support for the protection of Palestinian collective rights. The policy commits TUC to “raise the pressure on corporations complicit in arms trading and supporting Israel’s illegal occupation and settlement building” by developing strategies and working in collaboration with affiliated unions, the international trade union movement, and the Palestine Solidarity Campaign to put pressure on complicit corporations to cease these irresponsible and unjust activities.

Two weeks later, Labour conference passed a motion entitled “Ethical Foreign Policy”. This included a call to “work globally for an alliance” rejecting trade agreements with Israel that failed to recognise the rights of Palestinians, and declared US President Donald Trump’s proposed peace plan – dubbed the “deal of the century” – a “one-sided attempt to destroy Palestinian rights”. The motion also commits Labour to apply international law on all trade with Israel, including arms trade. The motion was passed almost unanimously by conference delegates at the end of the International Affairs session on Monday 23rd September.

Now the policy is in place, it is up to us to put the substance into practice – to channel these crucial policy principles into achievable campaigns in order to build effective solidarity with Palestine. The UK trade union movement must be at the forefront of this action.

The first step in this process is the upcoming Palestine Solidarity Campaign conference for trade union activists taking place on Saturday 12th October in London. Entitled “Solidarity with Palestine: Next steps for the UK Trade Union movement”, it is supported by PCS and TUC, Unite the Union, UNISON, GMB, NEU, ASLEF, UCU, RMT, FBU, TSSA, Thompsons Solicitors and the CWU.

This event, featuring Palestinian and UK speakers, will provide the space and tools for trade unionists to further our solidarity work for Palestine. A number of seminars will explore the situation of Palestinian workers under occupation, how to develop Boycott, Divestment and Sanction (BDS) campaigns in our unions, and how we can make a stronger case for Palestinian rights.

Moving forward from the fantastic milestones of the past few weeks, this is the next major step for all UK trade union members who want to play a part in supporting our brothers and sisters in Palestine achieve the fundamental rights they are being denied. An injury to one is an injury to all! 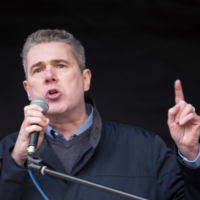