The UK is the sixth richest country in the world but, after almost a decade of government austerity, millions of people are struggling to feed themselves and their families. This is a scandal that shames our government every day, especially on World Food Day – today.

Last year, Lewisham Foodbank gave out a record 4,850 emergency supplies, a rise from 3,386 in 2013. Other local food banks across the borough are reporting an increase in demand and research from End Child Poverty shows that a shocking one in three children in Lewisham are living in poverty. It will be a similar story across the poorest parts of the country.

The council is working hard to support our vulnerable residents, including by installing food bank donation points in our Town Hall and council-run libraries. But we know food banks are a symptom, not a solution, to food poverty. As much as the Tories might try to deny it, they have presided over an increase in families struggling to feed their children and the fraying of the social security net that is meant to stop people falling into crisis.

That is why Lewisham’s politicians and the community groups that help vulnerable residents day in and day out have come together to make the case to the Secretary of State for Environment, Food and Rural Affairs, and urge the government to set out an action plan to end food poverty in the UK.

Earlier this year, the United Nations’ special rapporteur published a report on extreme poverty and human rights in the UK and condemned austerity policies as being “in clear violation of the country’s human rights obligations”. The government’s response was dismissive and showed a callous lack of empathy.

Universal Credit, the biggest welfare reform in a generation, encapsulates how the government’s ideological austerity policies have failed people. Under the pretence of making it easier for people to manage their finances, the rollout of Universal Credit has seen a shocking rise in poverty and people struggling to make ends meet.

Research from the Trussell Trust shows that almost a quarter (24%) of food bank referrals in the UK are due to benefit delays. In Lewisham, we are hearing from people every day who have applied for Universal Credit but have to wait five weeks before their first payment. This has serious implications for their finances, ability to pay rent, and mental and physical wellbeing.

The government’s independent review on developing a national food strategy will not be worth the paper it is printed on if it does not include ending the five week wait for Universal Credit and a clear plan to ensure everyone has access to nutritious and affordable food.

At our conference last month, it was announced that a Labour government would halve food bank usage within a year and set a target of ending the need for food banks altogether within its first three years. This would be achieved by ensuring that everyone in the UK has a Right to Food enshrined in law, and introducing a £6m Access to Food Fund to kick start the development of local community food plans in the 50 most food deprived areas of the country. Crucially, Labour would also scrap Universal Credit. We need all parties to follow suit.

With the ongoing uncertainty around Brexit and the climate crisis threatening our food security more than ever, we must act now. We need to ask those difficult questions about where we will get our food from in the future, and how we will ensure that nobody goes hungry in our society. 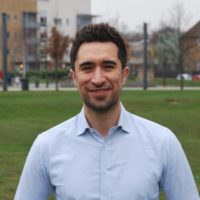 Damien Egan is mayor of Lewisham.