December’s election result was devastating. Labour are now guaranteed to be out of government for a further five years, with some pundits arguing that we’re at least a decade more in opposition – given the huge task ahead to win back the fallen ‘red wall’, plus the additional 50-odd seats we already needed to form a government. Truth be told, real power for Labour now lies in regional and local government, where we can still impact change for our communities, even with Boris Johnson in Downing Street.

For local councils like the London borough of Redbridge, we’ve had our sleeves rolled up for the best part of a decade to protect our residents from the worst of Tory austerity. We couldn’t have built a new leisure centre, regenerated the town centre, kept our library facilities, strengthened our enforcement team, or built social housing for the first time in a generation if we hadn’t won back the council in 2014. It takes Labour councils to protect public services when the Tories are in power, and that’s what we’ve been doing.

This is why I’m standing to be Labour’s candidate for the London Assembly in my part of East London – Havering and Redbridge. I have spent the past thirty years campaigning for equality and fairness – for decent homes, accessible childcare, better schools, and improved life chances for the residents of East London. I have led campaigns to open new health facilities, for investment in transport, and better services to help newcomers to the area integrate and become a part of our community. I have worked in the voluntary sector for over twenty years and I know how important civil society is to maintain the fabric of our communities; increasingly, it is civil society that has to step in when austerity hits our families.

I was a single mother living in East London for many years – I know how hard it can be. But today, it is even harder. Securing a council home for myself and my son in the mid-nineties saved our lives – third time lucky after flooding and infestations. When families visit my advice surgery today, I know that their chances of landing a secure tenancy in a social home are lower than ever before, despite the fact that council house building is finally being undertaken by Labour authorities under the mayor’s building council homes for Londoners programme.

Housing is the most pressing issue for Londoners – often only ever second to crime and community safety. Housing stresses us all out; the lack of supply, its unaffordability, the precarious nature of private renting, and the shameful rise of homelessness under Tory austerity while luxury flats sit empty. We need City Hall investment now, more than we ever did before; without a Labour government it’s our only hope to plug the gap.

London is undoubtedly a Labour heartland – one we must celebrate and nourish. While we try to win back seats in the Midlands, the North of England and Scotland, we must be sure to simultaneously prioritise the voters who saved us from electoral oblivion and will hopefully be returning our Labour mayor to power in May. London is the greatest city in the world and we’ve much to celebrate – but we have one of the starkest levels of wealth inequality in Europe, violent crime ripping families apart, and nearly one hundred people becoming street homeless every week. The louder the Labour voice in City Hall, the more power we have to deal with the issues that Londoners truly care about.

Through chairing Sure Start, being a councillor, and working in the voluntary sector, I know that the stories behind the successes – grassroots community groups and hardworking Labour representation – are what we must promote to win a seat like Havering and Redbridge, one that Labour has never before held. That’s why I’m standing, because we deserve the best chance to beat Keith Prince, and I believe I can offer that to Labour members. 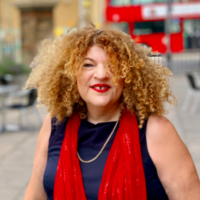 Judith Garfield is a Labour councillor in the London borough of Redbridge.

View all articles by Judith Garfield