The morning of the 13th of December was an incredibly low moment for me. Although I had been strongly endorsed by my constituents to continue representing them, many of my colleagues – who had consistently fought for their constituencies and held the government to account on a wide range of issues – had lost their seats.

An outpouring of critical, and some less critical, analysis of the reasons that the Conservatives won a resounding landslide has followed. The truth is probably an amalgamation of everything that has been said, and a lot of what has not. The ‘public’ are not a homogenous group and the reasons for voting a certain way are often complex and deeply personal. It would be a mistake to think that building a winning electoral coalition for Labour will be an easy task – we know, for instance, that people are not as politically tribal as they once were.

People have been willing to share their views with me, not only while I was out campaigning during the election, but also at my drop-in surgeries and at community events prior to the election. The views were vast and varied, and the majority of conversations were respectful even when there was a disagreement. But what those conversations tell me is that people are not disengaged from politics. They really do care, they want the country to be better, and they do want change.

After a decade of Conservative rule, Labour remaining in opposition is devastating not only for those of us who care about the party but also for all of the hard-working people around the country who are already suffering, and who will now continue to suffer, as a result of Tory policies. The hard truth is that Labour has failed these people by failing to win. Labour has failed the millions of children in this country growing up in poverty, the patients and their families facing ever-increasing waiting times for treatment through our National Health Service, and we have failed the working families already struggling to make ends meet who are facing job losses because of Boris Johnson’s pursuit of a hard Brexit.

While we cannot know whether the Remain and Leave divisions will still exist at the next election, we can be sure that intergenerational inequality will, we know that the climate crisis will have worsened and we know that Britain’s place in the world will have been eroded.

The Labour Party needs to listen to all voices. We want to represent the people of the UK, not just Labour Party members, and the only way to do this is to get out and talk to people. Our democracy demands a credible opposition, and that is exactly what Labour needs to be over the next four years. We must use this time effectively to expose the government’s many failings and hold them to account for their policy decisions that negatively affect the most vulnerable in our society.

That is why we must work with other elected representatives to show the best of Labour in power; from Metro-Mayors to Police and Crime Commissioners. We need to build on the work that they are doing to tackle austerity day in and day out. We also need to learn from the positive messages that they are putting forward. Labour councillors have consistently raised issues, come up with innovative and ambitious policies and have delivered for their residents but the Labour party has not listened or learnt from them. These are our colleagues who evidence what devolving power can do.

How can we, as a party, take on that challenge and where do we start? Alongside my good friend Jo Platt, we set up Labour Friends of Local Government because we believe that the party needs to listen more to those embedded in their communities around the country. That means not only listening to councillors and officers but also civil society and the volunteers who work with local government on a daily basis. I am urging whoever has the privilege of becoming the next Labour leader to build that trust not only of the party but of the public too.

We cannot allow ourselves to become mired in internal discussions, and that is why I am pleased that Keir Starmer, my choice for Labour leader, has already written to local councillors. He has made it clear that listening to and working with councillors is a priority for him.

At the other end of the spectrum, the next Labour leader also needs to think about our place in the world. I am proud of the work I do as shadow minister in the Department for International Development. The policies which our team advocate for would see the UK adopt an explicitly feminist international development policy, maintain the strong role the department plays internationally in setting the tone when responding to humanitarian crises, promoting human rights, and leading in global efforts to tackle extreme poverty and climate change.

I believe that Keir has what it takes to win for the people who need a Labour government most. He has spent his life fighting against injustice; as a human rights lawyer – winning an award in recognition of his unpaid work challenging the death penalty around the world. And in his work taking on powerful vested interests during his time as director of public prosecutions – taking the last Labour government to court for refusing to provide benefits for asylum seekers and acting to prosecute Murdoch journalists involved in the phone-hacking scandal. 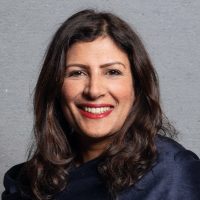