When the polls closed in May 2015, I got into my car to drive to the count, buoyant and excited. I was intensely proud of the campaign we had run in Cheshire West and Chester. We were disciplined, targeted ruthlessly, and had a clear message. Four years of focused door knocking and community action, a manifesto built by listening to residents and understanding what makes people tick.

Ed Miliband had visited us in Chester as we ran our local all-out local election alongside the national campaign, in which Chester was a target seat. Now was the time to return a Labour government and a new Labour council. I knew in my own marginal ward, in which I had to serve alongside a Tory councillor, almost every one of my Labour promises had been out to vote. So when I turned on the car radio and heard the exit poll, my heart sunk. How could that be?

I was deputy leader of a passionate, focused Labour group – a team determined to take control of a flagship Tory council, set up under local government reorganisation in 2008. A borough where the poorest communities were being left behind, with the difference in life expectancy between the most affluent areas and the poorest up to 13 years. In 2008, there were just 13 Labour councillors out of 72. In 2011, when I was elected, this rose to 32 out of 75, and we felt victory was in our grasp. We spent those four years in opposition working towards returning a Labour council in May 2015, it was our sole focus: every action, every word spoken.

We knew that to make a difference we had to be in power: opposition sucks, and inequality was growing. We needed to protect our most vulnerable residents against the harshest of Tory cuts. Group funds paid for a campaign organiser – who is now a councillor and Cabinet member – and we worked with The Campaign Company to target our election messages. Whatever we were doing worked and in May 2015, after several re-counts – and the support of an independent councillor – we took control of the council with a majority of one, and Chris Matheson won Chester City for Labour. But nationally, as a party, we failed.

But what lay ahead was four years of the worst austerity this country had ever known, the divisive Brexit referendum, and another general election in 2017. Under the leadership of Samantha Dixon we focused on delivering our manifesto promises through an ambitious council plan and, importantly, kept our eyes firmly on May 2019. Despite a majority of just one, we did not lose one single vote at council in the four year term. We thought strategically and politically, we never stopped campaigning, and we fine-tuned our 2019 election plan on lessons learnt from 2015.

We loudly blamed the government for the cuts that we faced, but also highlighting the difference that Labour makes in power. We held regular street and market stalls, delivered newsletters, led community activities, and kept knocking on doors. We developed a new manifesto involving every single party member from the five constituencies that sit within our borough. In the 2017 snap general election, we returned a Labour MP to Weaver Vale and our sitting MPs in Chester and Ellesmere Port and Neston won with increased majorities. Our campaign was their campaign: we work together; we are one team. But once again, despite a fantastic result in Cheshire West, we failed nationally and still had a Tory government. What on earth was going on?

We kept going, focused on May 2019. We developed a clear message of ‘building stronger communities’. We kept residents up to date with good news stories and positive messages about the difference a Labour council makes. We worked closely with our MPs to overcome challenges together. It was one of the toughest elections I had fought in 20-odd years of campaigning. National politics was playing strongly into local politics, threatening to overshadow the good relationship we had built with residents.

In response, we developed fantastic locally-based campaign material, with clear and simple pledges for our wards. We didn’t campaign in wards we couldn’t win, although in retrospect we didn’t do enough in two wards which were considered a given, this resulted in us losing two councillors, by a total of 18 votes. But the Tories suffered badly and Cheshire West and Chester is still a Labour council with lots of enthusiastic and talented new councillors joining a committed and focused group that I am proud to lead.

By the general election in December 2019, many residents were clear they didn’t like the party nationally. They told us they recognised the good work from their Labour MPs and councillors working together locally but felt disconnected from the national party. What did we stand for? What were our messages? How would we make a difference to their lives? Some didn’t trust the leader and felt the manifesto was a fairy tale. But we got out our vote and ensured all three of our super Labour MPs – Justin Madders, Mike Amesbury, and Matheson – got over the line, holding our section of the ‘red wall’, albeit with decreased majorities.

Our party needs time now for reflection and rebuilding. I’m pleased to have been nominated to represent Labour local government on the Labour Together general election review – take part here if you haven’t already. We need to learn lessons and change. The new leader of the party needs to come out and speak to us in local government and listen – we know how to win. In local government we also need to learn from each other: what works well, what needs to change. Local and national government should empower and listen to communities and stop offering top down paternalistic control by a centralised machine.

In Cheshire West and Chester, we recognise people’s hopes and dreams, and we are working hand-in-hand with our citizens and partners to build those stronger communities. I have no idea what the future holds nationally, but I am an optimist and I do know that a refreshed and repurposed Labour Party will be a force for good. We need to learn lessons of the past and present, work together as one voice, listen to our communities, have a clear vision and look towards that future to see what is possible for our country. 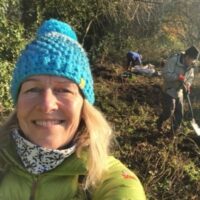 Louise Gittins is a Labour councillor and leader of Cheshire West and Chester Council.

View all articles by Louise Gittins