I am truly honoured and privileged to be here representing the people of my constituency of Birmingham, Hall Green. I am forever grateful to the constituents who have put their trust and confidence in me, with such a huge mandate.​
I have waited until today, February 5th, to make my maiden speech for two reasons.

Many members in the chamber may not be aware that today is Kashmir Solidarity Day. Kashmir Solidarity Day is in observance of support for and to express unity and solidarity with the people of Indian-administered Kashmir, and to pay homage to the tens of thousands of Kashmiris who have been martyred in the conflict by Indian armed forces.

On August 5th — exactly six months ago today — the Bharatiya Janata Party-led Indian government decided to strip the state of Jammu and Kashmir of autonomy after seven decades, characterising it as the correction of a historical blunder. This act is illegal and the international community’s silence on the matter is worrying.

In south Asia, the long drawn-out dispute over the state of Jammu and Kashmir remains a hanging fireball between two hostile nuclear neighbours, India and Pakistan. It has been bringing human misery in the form of wars on the issue and it continues to threaten regional and global peace. My role is not to take sides, such as to be pro-Pakistan or anti-India. I believe, as a Kashmiri, that it is my duty to highlight the abuses and human rights violations to this House.

The Scottish people were rightly afforded a referendum to express their desire for independence. The UK had a referendum on remaining in or leaving the EU. Seven decades later, the people of Kashmir are still waiting. This is not, in my view, a bilateral issue between India and Pakistan — the international community needs to take responsibility.

More than 40% of my constituents come from the region of Kashmir, so it is important to them to see the matter resolved, but that can happen only if the international community, through the United Nations, seeks a peaceful and lasting resolution. By abrogation, the special status of Indian-administrated Jammu and Kashmir was violated on August 5th last year.

The Indian government has audaciously defied the basic norms and principles underpinning the concepts of democracy and human freedom. India has deprived the Kashmiris of the right to express themselves peacefully. Even elderly women who marked a silent protest in Srinagar, the capital of India-administered Kashmir, were not spared and have been detained.

The Indian army and paramilitary forces operating in Indian-held Kashmir have deliberately and methodically violated the fundamental norms of international human rights law, for which the Indian government are responsible, despite their being a signatory to these laws. I demand an end to all elements of siege in the Kashmir valley and the full restoration of telephony and internet and of the democratic and basic human rights of the besieged Kashmiris. I demand that they allow them and foreign media to travel and report unhindered and commit to providing a safe environment for human rights defenders and organisations so that they can conduct their work without fear.

We have an international obligation to support peace, equality and just treatment for all humans. To quote Martin Luther King: “Injustice anywhere is a threat to justice everywhere.” It would be easy to make headline-grabbing jibes at Conservative members, but I will rise above that in my maiden speech and talk about the issues that need to be addressed in Birmingham, Hall Green.

The second reason I have chosen to make my maiden speech today is that this is national apprenticeship week. In 1989, at the age of 17, I secured an engineering apprenticeship with Royal Mail. Apprenticeships are an excellent way of providing secure jobs, a regular income and an early start into employment, and are an alternative to the academic route.

My apprenticeship provided me with an opportunity to go to university; I was the first in my family to do so. Much has been done in recent years on apprenticeships, as is acknowledged, and much is being done by many councils across the country, but a lot more could be done. The next step has to be Whitehall giving control to the regions and local authorities. Many have benefited from apprenticeships, but many more could benefit, and not just the young either; older people can benefit too.

The climate emergency needs to be taken seriously and can be avoided if bold and ambitious steps are taken. Hundreds of properties have been flooded in Birmingham, Hall Green and remain at risk of flooding from the river Cole. Urgent and adequate funding and a programme are required to prevent such disasters from happening again.

It is also appalling that in this, the fifth-richest country in the world, children are going to school hungry. The only meal some of them have in the day is the one they have at school. It is shameful that, while we enjoy the benefits of a subsidised canteen here in parliament, many children in our constituencies remain hungry and are resorting to food banks in record numbers. We ought to be ashamed.

As long as I am in this House, I will continue to speak up for investment in services and the creation of opportunities for everyone in Birmingham, Hall Green. I will continue to speak up and challenge the government to invest in public services that will have a positive and lasting impact for my constituents. The people of Hall Green have placed their trust in me, and I pledge to represent their interests and concerns to the best of my ability for as long as I remain in this House. 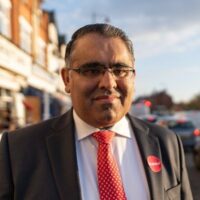 Tahir Ali is the Labour MP for Birmingham Hall Green.

View all articles by Tahir Ali