We may be four years away from a general election, but the Labour Party must be alert to the electoral challenges ahead. In this article, I review Labour’s prospects in key constituencies using a crucial criterion: education. In modern politics, education increasingly predicts support for progressive parties such as Labour. I outline routes to (i) a majority and (ii) a minority/coalition Labour government, with specific reference to the number of educated voters in target seats.

Caveats are necessary. A lot could change between now and 2024 – there may be boundary changes, and Scotland might even become independent. Rather than setting out a detailed roadmap, this exercise merely considers potential complexions of Keir Starmer-led governments. People should be mindful of these limitations and should not fixate on individual constituencies.

Though many think a Starmer majority unlikely, this possibility should not be dismissed. As Leo McKinstry emphasised in the New Statesman, 67 Conservative seats would fall with a swing of less than 5% – most of them Labour targets. Such a swing might be driven by voter perception of Starmer’s competence, as Ipsos MORI researcher Dylan Spielman argued. The map below depicts Starmer victories in 105 seats, in which the required swing is less than 8.9%. I do not consider seat demographics or the incumbent party. These ‘regular’ Labour gains are in red. 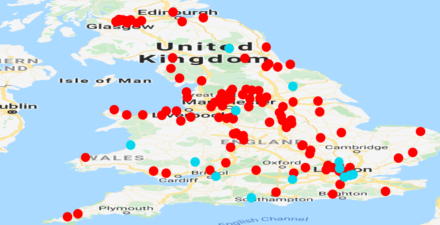 Yet the assumption that swings will be uniform is increasingly problematic, considering factors such as voter dealignment. Rather than make even progress across the country, Starmer is more likely to be successful in particular types of constituencies. Education is a key predictor of support for Starmer. Not only does BES data show that Starmer fares well among those educated to a higher level, but similar politicians are successful among educated citizens across countries.

Given the appeal of Boris Johnson to less educated voters, this cleavage is likely to deepen in coming years. I expand this point in scenario two, but here let’s assume that Starmer makes even more progress in Conservative seats with high proportions of educated voters. In the map, Starmer takes Conservative seats in which the required swing is between 8.9% and 15% and there is an above average presence of voters with degrees.

These ‘educated’ Labour gains are in turquoise. I use data from the 2011 census. Though this is now rather old, better data is not yet available and the distribution is unlikely to have changed markedly. There are other predictors of support for politicians like Starmer, e.g. youth and affluence, but it’s best to keep things simple and education also correlates with other predictors.

There are only 13 of these seats. I had thought there would be more. This underlines the challenge facing Starmer. Adding 105 to 13 and assuming no losses, Starmer nonetheless has 320 seats, which delivers a working majority.

Scenario one is far-fetched, in my view. Not only does it require Starmer to win seats with huge Conservative majorities, but he will not necessarily benefit from declining popularity of the Johnson government. Voters unhappy with Johnson could move to the right or abstain. A more likely prospect is a Starmer-led coalition or minority government. This would only require about 50 Conservative losses.

Though some envisage marginal ‘Red Wall’ seats returning to Labour, as modelled above, I’m not so sure. The profile of voters in such seats – older, less educated and poorer – is compatible with Johnsonian Conservatism. If such voters become disillusioned with the current Prime Minister, they are unlikely to vote Labour. The second map therefore shows no uniform swing and depicts Conservative losses only in seats with an above average presence of voters with a degree and a required swings of less than 10%. There are 53 Conservative losses – 32 gains for Labour, 20 for the Lib Dems and one for the SNP. 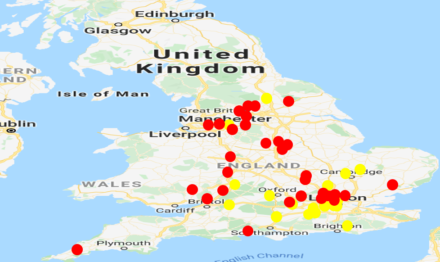 The gains in the second map are realistic. And though such an outcome may disappoint some Labour activists, it should not. The formation of any Starmer-led government would be a major achievement, given the party’s starting point. If Starmer does make such gains, the Labour voting coalition will nonetheless be different – continuing the move away from traditional supporters.

This may make Labour more socially liberal, but there are major disadvantages. Loss of working-class support lessens redistributive capacity. Because poorer citizens endure material hardship, they prioritise measures that improve their position, middle-class voters being less sensitive to relevant initiatives. This is most concerning because the Labour Party was established to help the poorest.

Below are the seat lists for both scenarios, broken down by ‘regular’ and ‘educated’ gains in the first and by political party in the second. 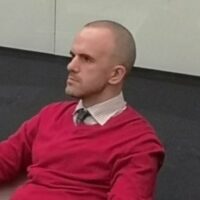 Thomas Prosser is a reader in European social policy at Cardiff University.

View all articles by Thomas Prosser