The image of the stoic but irreverent Poor Bloody Infantry engaged in a relentless but futile conflict in Flanders and Eastern France is perhaps the most recognisable and evocative moment in Britain’s twentieth century. It’s the sense of pointlessness as much as the sheer scale of death and destruction that has driven that cultural resonance. Feuds in Scottish Labour during the last 20 years haven’t involved any real bullets whizzing past participants and the snipers were merely metaphorical. But the party’s experience of a long, drawn-out internal conflict has been accompanied by huge numbers of casualties in terms of elected representatives, votes and political careers. Divisions within the ranks have included differences over which front to fight on as well as which strategies to deploy.

After polling under 10% in the 2019 European election, and then losing all but one of its seven MPs at the general election, pressure has heightened on Scottish Labour leader Richard Leonard. Leonard was elected just after the 2017 general election, promising to build on the relative progress Labour had made: gaining six seats and securing a slight increase on the vote following the rout of 2015. His programme centred on overturning the constitutional focus of Scottish politics, now dominated by the pro-independence SNP and the avidly Unionist Tories. In place, he sought to unite working-class both Unionist and pro-independence Scots under a left-wing social democratic platform.

Recent analyses by political science researchers, Bennett, Moon, Pearce, and Whiting, concluded that the “conceptualisation of party competition as determined solely or largely on the left–right economic dimension of politics will be unlikely to succeed. This is because competing at the substate level, integrated parties need clear answers to constitutional questions and those of national identity.” In other words, an approach that attempted to sideline both the debate over independence and then Brexit was not tenable.

The Scottish academics Ailsa Henderson and James Mitchell have compiled a statistical explanation of why Scottish Labour emerged as the chief losers from both these elections: Labour lost around 40% of its 2010 general election votes to the SNP in 2015, including over 80% of its voters who had voted Yes in 2014. In 2017, Labour went on to lose around over half of the 30% or so of its 2015 voters who had voted Leave, principally to the Tories.

Labour has been beset by constitutional divisions that punctured its big tent and made it less able to reorientate itself than the Tories or the SNP. The Nationalists, despite having traditionally been divided over the EU, have been able to unify under an ‘Independence in Europe’ platform with a pedigree that goes back to the 1980s. Meanwhile, in spite of Ruth Davidson having been a leading voice in the ‘Remain’ camps, the Scottish Conservatives have buried the hatchet on Brexit and accepted it as a necessary cost of maintaining the Union.

For partisans of Labour’s ‘moderate’ centre-left, these developments have dislocated the Europe of nations and regions perspective which made devolution and a decentralisation of Britain more palatable during the 1990s and 2000s. Their perspective is fundamentally torn asunder when it comes to the removal of Scotland from the European Union against its will. Ian Murray, the new Shadow Secretary of State for Scotland and MP for Edinburgh South, was one of the chief backers of the ‘People’s Vote’ campaign but flatly refuses to consider Brexit as a justification for a second independence referendum.

Since the general election, a second referendum has increasingly become the chief fault line within Scottish Labour’s ongoing conflict between left and right. Murray rejoined the shadow cabinet days after Jackie Baillie was elected deputy leader. Baillie is a survivor of many battles, having originally taken her seat in the first Scottish Parliament during 1999. She’s seen the political landscape torn up, her party turn to the left and was herself sacked from Leonard’s frontbench team in 2017. Baillie’s deputy leadership campaign was fought on a hardline Unionist platform. The vision it put forward is essentially one of retrenchment: Labour can regroup in the centre ground and become a ‘progressive’ anti-Brexit option for voters who find the Tories unpalatable.

Her opponent, Matt Kerr, the left-wing Glasgow councillor, put forward a different position. Kerr is one of the Scottish Labour left’s most ambitious thinkers. He profiled himself as a supporter of the universal basic income and the Green New Deal. Kerr disagreed with Baillie on a referendum, arguing that that if Holyrood voted in favour of an independence referendum it had the right to hold one. He certainly doesn’t speak for the entire left on the constitution, but it does represent a significant development. Kerr’s campaign team included younger left-wingers that had signed the Scottish Labour for Radical Democracy open letter following the general election, which called for Labour to drop its opposition to a referendum and embrace Scottish self-determination.

Kerr is no advocate of independence, and any move towards a more developed strategy on the national question will prove torturous within the left before advancing towards the wider party. But Scottish Labour does increasingly appear to resemble the wider Scottish political spectrum by having a left that is increasingly less antagonistic towards constitutional change as a mechanism for social and economic reform, and a right marked by blanket Unionist opposition to change. It’s hard to argue that either of these approaches will easily win over voters. Both leave open questions about what the purpose of Scottish Labour is. Baillie’s strategy begs the question of whether cooperation with other progressive Unionists in the Liberal Democrats would make more sense. Kerr’s argument about using Labour as a vehicle for radical left reforms no longer enjoys the backing of a left-wing UK leadership.

Richard Leonard naturally leans towards the left but the logic of parliamentary debate and the pressure of the Holyrood group – and now Baillie and Murray’s presence – force him into unhappy compromises. It doesn’t appear that Keir Starmer will help him. The new leader made a vague promise for ‘federalism’ in his campaign material and this was repeated in a Daily Record column that he wrote shortly after winning the leadership election. But Starmer’s vision of federalism looks suspiciously like an extension of devolution, falling far short of a radical transformation of the British state complete with a written constitution and the end of centralised parliamentary sovereignty.

The fact that Starmer hasn’t made these lines a part of his UK platform suggests they are in fact seen as little more than a means to resolve the Scottish question. This won’t work, but it will help to box in Scottish Labour around an opposition to indyref2 position. Murray will reinforce this message as the Scottish party’s most prominent spokesperson outside of Scotland. The left will be frustrated and demoralised, defending a leadership under fire and more constrained than before in its capacity to put forward a platform of sweeping reforms.

Coronavirus reconstruction may alter that environment significantly, but in Scotland, so far at least, the tendency has been towards a national unity framing that seems even more impervious to politicisation than the discussion across the UK. Whilst Murray and Baillie’s strategy may seem to involve exchanging the trenches for the nosedive of kamikaze Unionism, those of us left stranded in no man’s land can’t be blamed for singing a chorus of ‘we’re here because we’re here’. 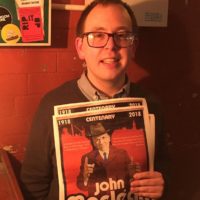