Conservative MPs have shared a video of Keir Starmer that was edited to be misleading and promoted by far-right accounts on social media to discredit the Labour leader.

The original tweet alleged that Starmer was accounting for “why he didn’t prosecute grooming gangs”, when in fact he was explaining why he implemented reforms as the Director of Public Prosecutions.

The full video shows that the now Labour leader was saying new guidelines were “based on a recognition that the approach being taken in the past was the wrong approach”.

Starmer was offering examples of how the past approach was flawed, but the edited video shared by Tory MPs made it look as if he was endorsing the previous approach.

A Labour source said: “This is a doctored video tweeted by far-right social media account. As a government minister, we hope Nadine Dorries acknowledges this and takes it down.” 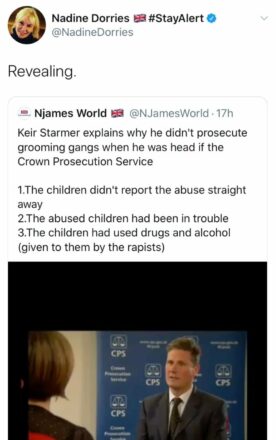 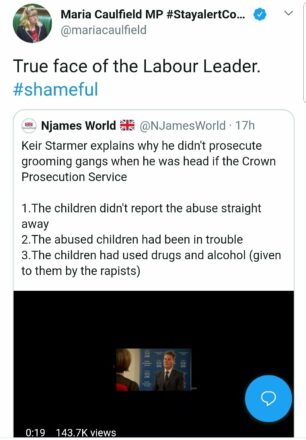 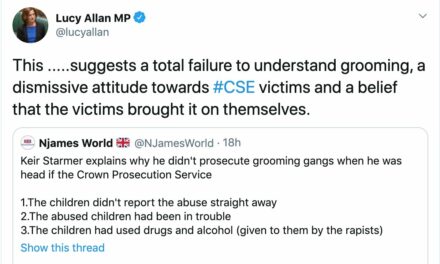 After deleting her quote tweet, however, Allan tweeted: “There was a total failure by the authorities to understand #cse #grooming, a dismissive attitude towards victims, and a belief that victims brought it on themselves.”

The new post by the Conservative MP for Telford does not acknowledge that these arguments align with the point that Starmer was putting across in the unedited video.

Allan is parliamentary private secretary to the House of Commons leader Jacob Rees-Mogg, while Dorries is a government minister and Caulfield is a former Tory vice-chair and currently assistant whip.

In response to the events, Labour frontbencher and former Women’s Aid manager Jess Phillips tweeted a link to the full video and said: “Full video, these changes secured prosecutions.

“I know because I was there fighting for it & supporting victims. We’re no where near tackling this for good, there were & still are failings but the truth matters. @Keir_Starmer was part of the solution”.

Labour’s deputy leader Angela Rayner commented on the story, tweeting: “Absolutely disgusting stuff, we are trying to work constructively cross-party in parliament given the #COVID19 pandemic, this really is out of order”.

Downing Street declined to comment when asked whether No 10 condemned the actions of the Tory MPs or had asked them to delete the tweets.

Update, 3.35pm: A Downing Street spokesperson said: “The MPs involved have been spoken to by the whips’ office and reminded of their responsibility to check the validity of information before they post on social media sites.”