Being transgender is difficult, even on the left. However, it is not all doom and gloom. My Constituency Labour Party (CLP), Bridgwater and West Somerset, is a perfect example of a positive, supportive and inclusive space for trans people in the Labour Party. When I went to my first meeting back in November 2019 and smiles broke out when I mentioned that I’m transgender, I knew it was safe to be me in the local party.

I now don’t feel as safe as I used to in these spaces, and this is purely due to misinformation out there. I’m fearful that I could be verbally or physically attacked just for needing to use the toilet. We’re all human, it’s normal to need a toilet when you are out in public. On the other hand, the poll shows that Labour voters understand that I belong in these spaces, which makes me proud to be an openly transgender member of the Labour Party.

I’m passionate about taking a calm road to trans equality in the Labour Party, particularly because my own coming out experience was far from calm and educative. It’s not a secret that, because of my transition, I am estranged, my parents still don’t accept me for who I am and there hasn’t been any constructive dialogue between us since I came out to them nearly two years ago.

As someone who understands that hostility only adds fuel to the fire, I know the trans community deserve better than a fight between anti-trans groups, “legitimately concerned” members and trans members. We must be mature and listen to all sides of the conversation and take opportunities to educate when someone is misinformed, because that way we gain friends rather than enemies in the upward, worldwide battle for trans equality.

As a local party, we have achieved great things over the last eight months to advance trans rights. Most significantly, my local branch passed a motion titled “delivering a trans inclusive Labour Party”. In this motion we noted how anti-trans rhetoric is still given a platform in the party, called for an educative approach to tackle anti-trans rhetoric and considered how we could improve trans representation at all levels of the party.

Last Tuesday, July 14th, I organised an LGBT+ talk and Q&A session for my CLP, which was also attended by our friends from the neighbouring constituency Wells. The talk featured Luke Pollard, Plymouth’s first out MP, who I decided to invite whilst planning the event. The aim of this event was to build on the motion I explained above. At the start, I explained why events like these are important in the effort to support trans rights and I spoke about the work going on in Somerset to support LGBT+ young people that I benefitted from myself. Luke spoke about some of his own experiences, highlighted some amazing work going on in his constituency that supports trans and non-binary people as well as the LGBT+ community as a whole. He expressed very clearly that nobody should be treated differently because of who they fall in love with or because of who they are.

We had a wide variety of questions, which Luke answered in a measured and inclusive way. Topics ranged from pension rights to sexual health and mental health in the LGBT+ community. We also spent a lot of time discussing how to have constructive conversations when tackling discrimination and misinformation within our movement and in the wider community. The members who attended this talk found it inspiring and felt more aware of issues faced by the trans and wider LGBT+ community. Because of this, our CLP will be hosting more events like this one on a variety of topics and I encourage other CLPs to consider doing the same. It is important to have these conversations in safe environments, so members have the opportunity to learn and ask questions.

There is an easy way you can be more inclusive. If you are unsure of someone’s pronouns (he/him/his, she/her/hers, they/them/theirs for example), just ask. When you meet someone, introduce yourself with your name and pronouns and then ask them what their name and pronouns are. This is a respectful way to not only ask someone how they wish to be addressed by others, but it also signals to transgender, non-binary and gender non-conforming people that you are an ally to our community. By starting conversations and working together, we can make all spaces in the Labour Party safe and inclusive for transgender members. 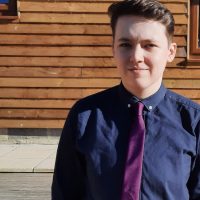 Dylan Tippetts is a Labour member in Bridgwater and West Somerset. (He/him).

View all articles by Dylan Tippetts