Dan Carden has resigned from the Labour frontbench over the leadership’s decision to whip MPs to abstain on the government’s controversial ‘spycops’ bill set to receive its third reading in the House of Commons this afternoon.

The left-wing MP, who was appointed to Labour’s Treasury team as shadow financial secretary in April, has written to Keir Starmer confirming that he intends to vote against the covert human intelligence sources (criminal conduct) bill.

The former Unite staffer has told Starmer that “as a matter of conscience I must use my voice and my vote on behalf of my constituents to object to legislation that sets dangerous new precedents on the rule of law and civil liberties”.

A Labour Party spokesperson said: “We are disappointed that Dan is stepping down from his role… Dan has been a valued member of Keir’s frontbench and the shadow Treasury team, and will continue to play an important role in ensuring a Labour government after the next election.”

The so-called ‘spycops’ bill aims to give legal protection for a previously secret power – “the third direction” – allowing MI5, police forces and other specified public bodies to authorise agents and informants to commit criminal offences.

Amnesty UK has warned that “this bill could end up providing informers and agents with a licence to kill” and stressed that it “does not explicitly prohibit MI5 and other agencies from authorising crimes like torture and killing”.

20 Labour MPs defied the one-line party whip to abstain last week and voted against the CHIS bill at second reading, though it was approved by a majority of 162 votes. The rebellion is expected to be bigger today.

In his resignation letter to the Labour leader, Carden wrote: “At the second reading, I followed the party whip to abstain in the hope that I could work constructively to shift the party’s position towards opposing the bill at third reading.

“It is now clear that this has not been possible. We have spoken at length on these matters and I know you have settled on yours and the party’s position towards opposing the bill from your own experience and with sincerity.

“You will understand that as a Liverpool MP and trade unionist, I share the deep concerns about this legislation from across the labour movement, human rights organisations, and so many who have suffered the abuse of state power, from blacklisted workers to the Hillsborough families and survivors.”

LabourList revealed on Monday that Keir Starmer planned to instruct all Labour MPs to abstain on the third reading of the bill this week – even if the changes being put forward by the opposition party are not adopted.

His decision, while supported by many frontbenchers plus backbench MPs such as Yvette Cooper, has been met with some resistance. Concerns were expressed during a Parliamentary Labour Party meeting over Zoom.

The general secretaries of 14 trade unions, 20 Labour MPs including Jeremy Corbyn and a number of campaigning organisations have released a joint statement urging Starmer to change course on the CHIS bill.

But shadow security minister Conor McGinn has used a piece for LabourList to describe the bill as “far from perfect” yet “necessary” due to “the need to provide a clear lawful framework for the use of human intelligence sources”.

McGinn wrote: “Without the legislation, undercover sources will either be unable to operate – depriving our security services of a vital tool in disrupting terrorism and serious and organised crime – or continue to do so only by operating in the shadows.”

Carden has told Starmer today that he will offer his “full support” to the Labour leadership and focus in the months ahead on representing his Liverpool Walton constituents during the coronavirus pandemic.

Reacting to Carden’s resignation, Momentum co-chair Andrew Scattergood said: “The size and scope of this growing rebellion shows that an increasing number of MPs agree with the view of grassroots members: that we won’t beat the Tories by abstaining.” 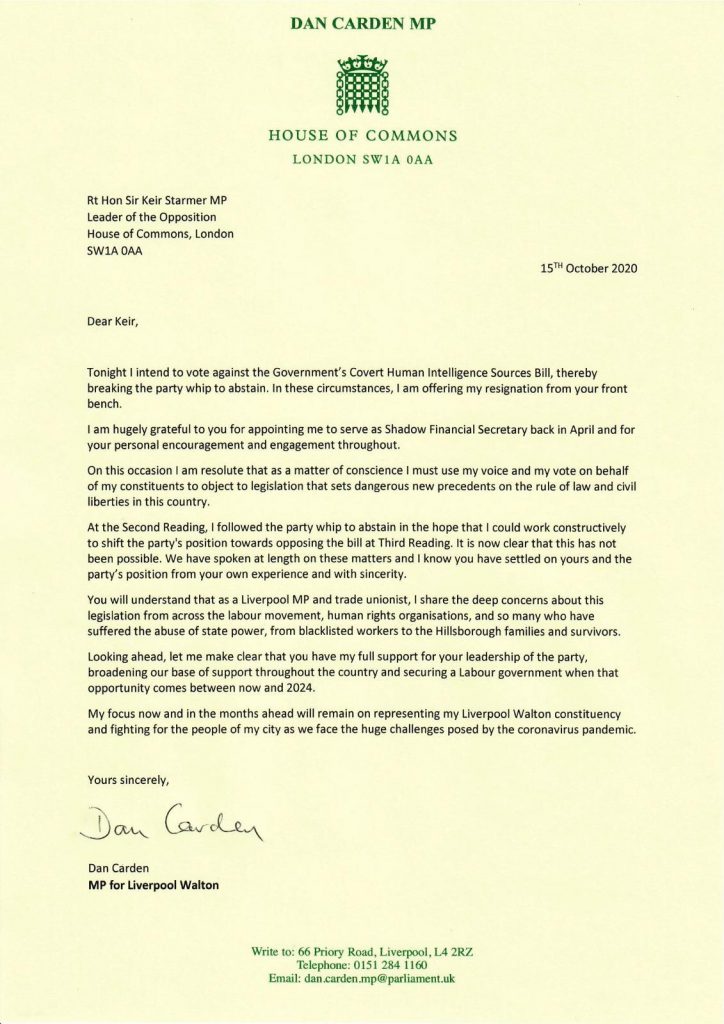