When a landslide majority government faces a rebellion that would potentially derail its post-Brexit legislative agenda, it is worth paying attention.

The current ‘genocide amendment’ tabled by Lord Alton would require a vote in parliament where UK courts find a trading partner guilty of genocide. A predecessor amendment to the trade bill was narrowly defeated in the Commons last week by just 319 to 308 votes. While unanimously welcomed by Labour, a number of Tory rebels led from the backbenches almost tipped the vote. On Tuesday, it will once again be put to MPs.

This amendment is of exceptional importance. There is mounting evidence now that the Chinese state is mobilising a campaign of genocide against the Uyghur people in the Xinjiang province. Now, as many as two million civilians appear subject to crimes against humanity, including forced labour, forced detention and forced sterilisation as part of an eradication of the Uyghur identity, language, religion and culture. Currently, the international community is powerless to obtain a genocide determination through the international courts, given China’s UN Security Council veto would block any referral to the International Criminal Court.

No crime involves such a systematic destruction not only of human lives but the collective identities that make up the foundation of human society. It is the first duty of government to protect and safeguard the lives of its citizens. When the Chinese government itself coordinates a campaign of genocide, it profoundly betrays those very responsibilities it is charged with protecting. As Britain forges new relationships independent from the EU, we must ask: what values does Britain really stand for?

Internationally, Dominic Raab’s recent condemnation of forced labour in Xinjiang was criticised for failing to include widely expected sanctions on Chinese officials responsible. More widely, the Labour Campaign for Human Rights recent report on trade and human rights has found that, outside the EU, the UK is now failing to promote human rights abroad – instead prioritising “quick and dirty” trade deals. In a recent letter to parliamentarians, Lisa Nandy and Emily Thornberry expressed concerns that any “human rights principle appears to have been diluted, or indeed lost entirely”.

Human rights must be the defining principle of UK foreign policy if Britain is to set a gold standard across the world. First and foremost, Labour MPs must do everything they can to pressure their Conservative colleagues to support the proposed genocide amendment as it is once again put to the Commons.

Labour’s support for the amendment can only be one part of a values-driven foreign policy that prioritises human rights. Starting with Europe, we must address concerns over the government reneging on its recent commitment in the EU-UK trade and cooperation agreement to the European Convention on Human Rights. The government’s recently announced review into the Human Rights Act risks merely acting as a guise to water down our commitment to an international human rights framework, following the 2015 Tory manifesto commitment to scrap the act and replace it with a ‘British Bill of Rights’.

A raft of proposed legislation threatens these rights. For instance, the overseas operations bill raises the barriers to prosecute those accused of murder and torture, with the government required to consider derogation from our human rights standards in overseas military operations. The joint select committee on human rights report criticised this approach and the Bingham Centre for the Rule of Law stated that the bill risks criminals “getting away with murder”.

From Turkey to Vietnam, Britain must take a consistent approach to achieve a truly progressive agenda in forging new trade deals. A number of rushed agreements signed towards the end of the transition period have failed to guarantee human rights protections. The recent UK-Kenya trade agreement omitted reference to human rights present in previous agreements, such as in annex III of our agreement with Côte d’Ivoire. If Britain cannot stand up for human rights negotiating with Kenya, then what about a potential future trade deal with China?

We must start now in taking a clear stance on human rights as the stakes only continue to rise. The government’s current all-words-no-action strategy cannot cut it if human rights are to be the defining principle of UK foreign policy. MPs have a once-in-a-generation chance to take a stand against genocide. But this cannot exist in isolation. Parliament must make this vote an opportunity to define our human rights policy for years to come and assert what values Britain stands for in a post-Brexit age. 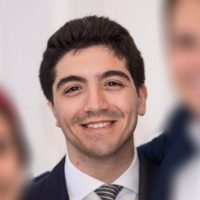 View all articles by Aladdin Benali