In Newcastle, this is the fourth year of the transport and air quality portfolio. Within that time, emphasis has shifted towards decarbonisation and the importance of air quality’s impact on public health. Transport is responsible for around a third of our city’s carbon emissions. The link between transport and our city’s environmental, economic and social health is clear; the design of places plays an important role in helping people make healthier transport choices for them and their families.

It is the role of transport to help meet a city’s needs, not compete with them. I feel that the right way of framing the city-and-transport question, particularly as we emerge from this pandemic, is to ask ‘What kind of city do we want?’, and then to ask ‘What can transport do to help us have that kind of city?’.

That is a question we asked ourselves early in the lockdown. We want to see Newcastle reassert the supremacy of our city over its traffic – and despite the challenges, we’ve treated this as a chance to change. The public debate around such an approach can be difficult when set within the context of a recovery from a pandemic that has threatened public health and economic activity.

Communicating what we’re doing and why is critically important. But so, too, is recognising that not everyone will agree with the actions we take. From the outset, we have made it clear that we may not get everything right immediately, and would make changes if we needed to. We have consistently done so, and this approach, as opposed to completely removing measures, has helped people to recognise we are listening to their feedback, but also that we will not avert from a course that seeks to rebalance our road space as we redefine our future.

The focus in all the actions we’ve taken has been on providing safety and security in the short term, but recognising that we should only take measures forward if they aligned with our longer term ambition. We have focused on specific themes of work. These were our city centre; district shopping centres and radial corridors; and low-traffic neighbourhoods. Before the pandemic we had endorsed the principle that we’d seek to join all these locations with a safe walking and cycling network – we’ve sought to accelerate that work.

Recognising that most journeys start or end at home, people’s choice of getting around the area they live is important in defining their other travel decisions. We believe low-traffic areas are the basis of delivering sustainable and thriving 15-minute neighbourhoods. Having defined all the likely areas we engaged with local councillors. This enables local ownership of the outcomes. Our early interventions have been targeted in areas where single closures to motor vehicle traffic can create lower traffic areas.

Given that people also feel the potential loss of what they have more intensely than what they stand to gain, initial opinions are generally driven by those who don’t wish to see the change. Giving time, and not reacting to remove measures too quickly, is important. In one area where we’d made similar interventions previously, two thirds of residents were against the change before we made it. Within a year, that had switched to two thirds of residents wanting the new restrictions to be retained. The sense of what people stood to lose had changed as they realised the benefits of living in a low-traffic neighbourhood.

In our city centre, we’ve also made major changes that we intend to make permanent. These focus on reallocating road space away from car parking and towards people and businesses for outdoor hospitality space wherever possible. These include one of our country’s most beautiful locations, Grey Street.

Our work throughout has been complicated by shifting guidance from government, generally with no advance warning. Along with this, the lack of a level playing field (such as certain powers only being available to London authorities) and an archaic number of different legal orders governing changes (parking being different to the traffic regulations on the same street, for example) are things we must work together to address and overcome.

Despite the challenges, it has been incredible to lead a division of people who were so keen to play their role in managing the impacts of this pandemic, and to help plot a course to recovery. Should any of you wish to visit Newcastle to see and discuss our changes, please get in touch. 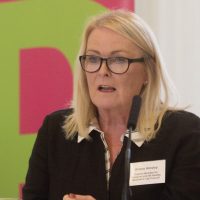 Arlene Ainsley is the cabinet member for air quality and transport on Newcastle City Council, and councillor for South Jesmond.

View all articles by Arlene Ainsley