Below is the full text of the speech Sharon Graham will deliver today to propose the composite motion on ‘fire and rehire’ at TUC Congress 2021.

Fire and rehire is an abhorrence. A legal mechanism used by bad bosses to slash labour costs under cover of a global pandemic. It is one of the scandals of our age.

Let’s remember what fire and rehire actually is. Workers wake up one morning and have 45 days to accept an ultimatum from the employer which involves slashed wages and terms and conditions. If the new terms are not accepted, it means the sack. Very often there is no warning.

This could mean workers losing their homes and their families and children being forced to move away from family, friends and neighbourhood networks, to seek work elsewhere.

When British Airways decided to fire 36,000 staff and rehire them on worse conditions, they did this because they saw an opportunity to make cuts and boost shareholder profits.

An opportunity to put into place plans which were in the making a long time. The pandemic provided them with the opportunity.

Colleagues, many of the firms employing this tactic are not doing so out of necessity – they are doing it because they can. They’ve thought ‘now is the time’.

BA had billions of pounds in reserve and no need to attack its own workforce. Go North West wanted to cut costs at their Manchester bus operation and saw a chance to do so.

As the composite demands, we must support all legislative efforts to ban this practice. We must support the bill being moved as a Private Member’s Bill by Barry Gardiner MP by every means at our disposal.

We must argue for increased consultation periods and better redundancy pay, of course. But we have to remember that on its own, a future legislative response will do absolutely nothing for the Weetabix staff about to go on strike in two weeks against brutal fire and rehire proposals being forced on them.

Any future change in the law will do nothing to get justice for the British Gas engineers sacked for taking a stand. No, Congress, we need action now.

Colleagues, I was elected on a mandate for change. On an industrial mandate to refocus my union on jobs, pay and conditions.

Not to step away from the political arena, but to make building power at work our number one priority so that we can then move the politics from the grassroots up. And with Labour in opposition and a government reluctant to act, our response must now be industrial.

Our priority must be to co-ordinate a fightback at the workplace. We have all shown that fire and rehire can be beaten.

At British Airways, we stopped the worst of the cuts. At Go North West, the firm backed down. At Synergy LMS, the GMB defeated the employer.

We can win and win more often, if we fully commit to delivering and focusing on building union strength and organisation at the workplace.

It is true, depending on the circumstances, that strike action might not be enough. And that is why we need to share resources and strategies, so that together we can deliver campaigns and give all our members the best chance of winning.

That must start with real co-ordination – not just words but practical action. It’s time for change. It is time for a new deal. It’s time that our focus was on winning at work.

No politician is coming to save us. No Westminster project is going to deliver pay rises for our members or defend them from bad bosses. That is our job. We need to do it ourselves.

The set routine of policy demand, followed by rhetorical claims linked to media releases, and finished with a lobby, has not succeeded. It is time to change that. It must end.

That’s why I want us to sit down as a movement and make some decisions. Put our priorities on the table and see what we can really do together. Put ideas into practice.

For having a go, for a fighting back trade unionism, rooted in the workplace. And for a progressive trade unionism that believes that solidarity is more than just a word on a banner.

Colleagues, remember what we are facing: emboldened employers, job cuts, wage cuts, attacks on reps, a mental health crisis in the workplace, and fire and rehire.

It is time that we make a new deal with workers. That we really organise the unorganised. It’s time that the labour movement was reborn. No more political tail wagging the industrial dog.

Instead, a simple pledge to our workers – we know what you want from us. Trade unions that do what they say on the tin. Fight for our jobs, for our pay and our conditions.

Congress, it’s time for change. It’s time to rebuild the movement at the workplace.  I move the composite on fire and rehire. Thank you. 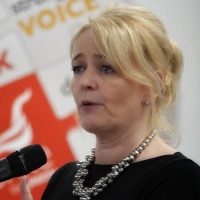 Sharon Graham is general secretary of Unite the Union.

View all articles by Sharon Graham