Research carried out partly during the ongoing sleaze row sparked by the Owen Paterson scandal has shown the Conservatives losing their opinion poll lead, with the party down four percentage points on September to 35%.

Ipsos MORI polling reported that 36% of voters intend to back Labour in a general election, unchanged from September. The Lib Dems also saw no change in their standing with the public at 9%, while the Greens saw a five-point boost to 11%.

The research also found a significant drop in the proportion of people who think that Boris Johnson has what it takes to be a “good Prime Minister”. More than half (55%) disagreed that he did, which is up 12 points and his worst score since June 2019.

Keir Starmer’s ‘good Prime Minister’ rating improved slightly in the latest iteration of the Ipsos MORI study with a fall in the proportion disagreeing that he has what it takes – down seven points to 41% – while 25% felt that he does. 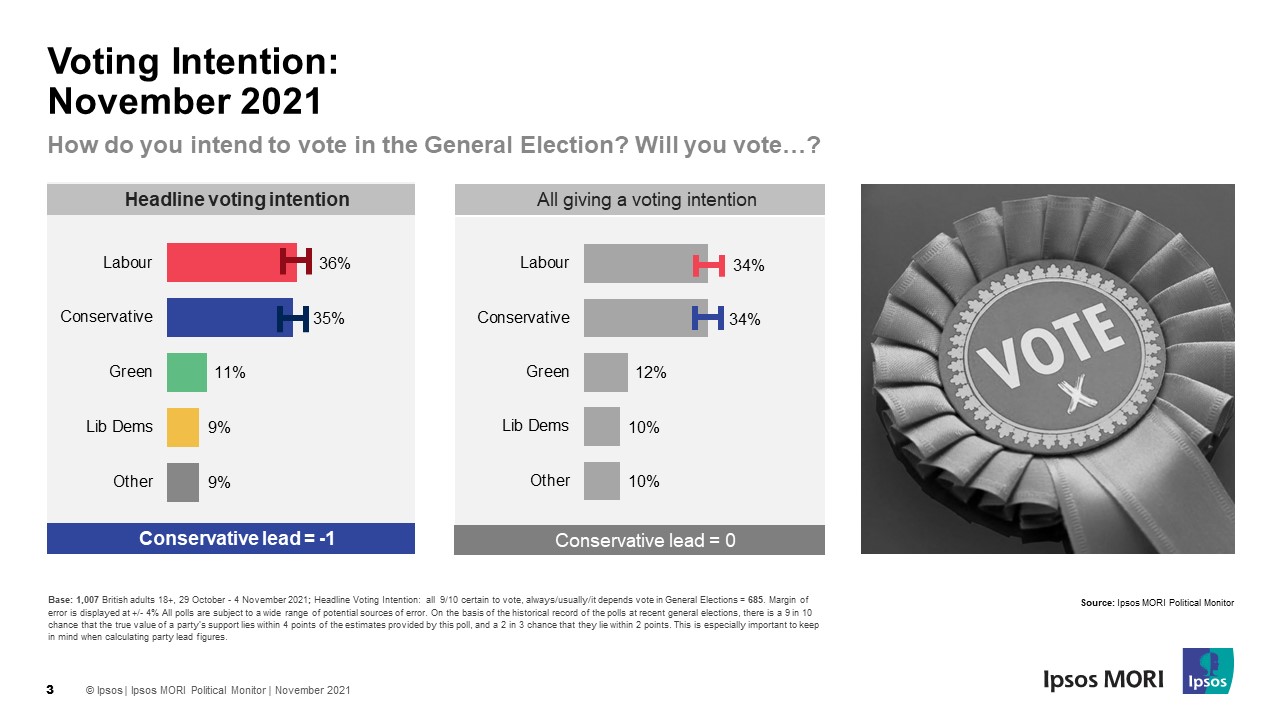 Satisfaction with how Johnson is performing fell five points from September. 34% told researchers they were satisfied with how he is doing as Prime Minister, while three in five (61%) were dissatisfied – a ten-point increase – leaving the Tory leader with a net-satisfaction rating of -27.

Three in ten (29%) said they were satisfied with how Keir Starmer is doing as leader of the opposition, up four points on the September research, while 50% were dissatisfied – representing no change since the last survey. 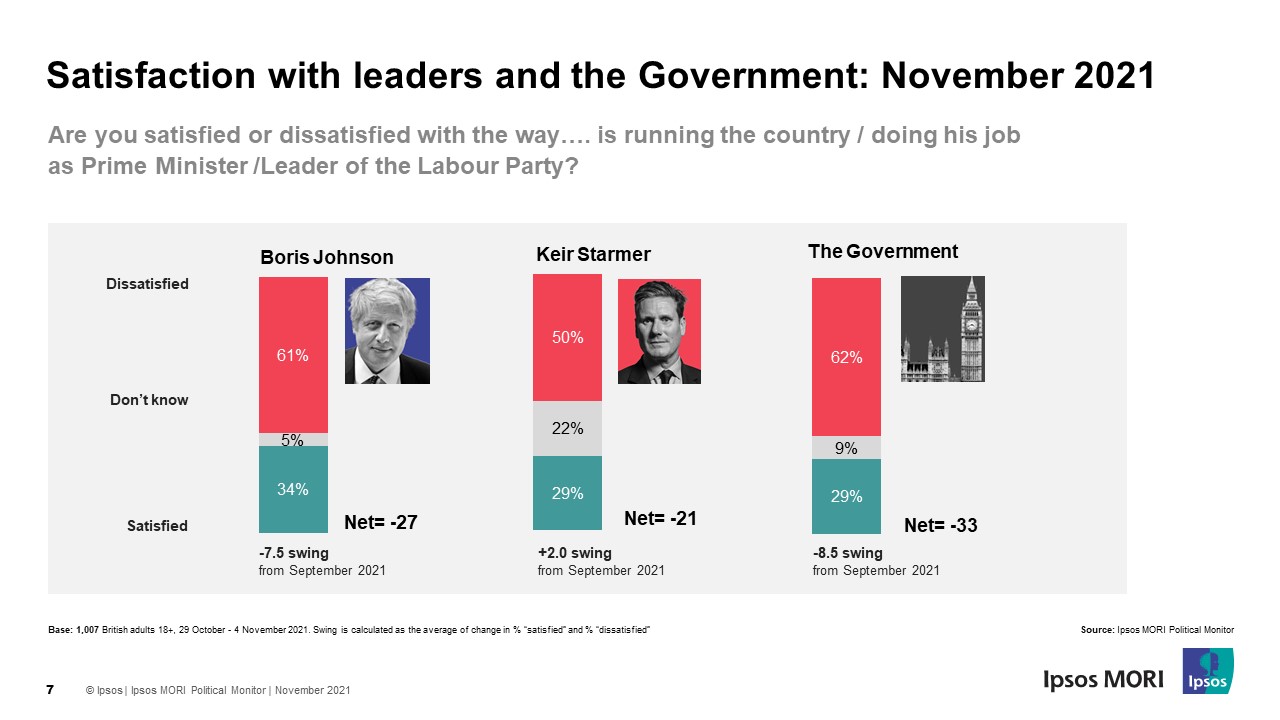 Johnson is still more popular than Starmer among supporters of their respective parties. 72% of Conservative supporters said they were satisfied with the Prime Minister, compared with 42% of Labour supporters who said the same of the opposition leader.

The polling, carried out between October 29th and November 4th, comes as Tory MPs refused last week to implement a 30-day suspension of Owen Paterson, as recommended by the independent parliamentary standards committee, after their Tory colleague was found guilty of an “egregious” breach of lobbying rules.

Paterson had been found by the Commons standards committee to have broken rules by making approaches to officials and ministers on behalf of Randox and Lynn’s Country Foods, which paid the MP around £112,000 a year combined.

The government, which had whipped Tory MPs to reject the committee report recommendation and overhaul the standards system, U-turned within 24 hours after a public backlash and Paterson resigned from parliament.

Starmer has called on the Prime Minister to “answer for his mistakes, apologise to the country and take action to undo the damage he has done” ahead of an emergency debate on the vote held last week on MPs’ standards.

“The country is yet to hear a word of contrition over his attempts to create one rule for him and his friends and another for everyone else. He must now come to the House and say sorry,” the Labour leader said today.

“He needs to go beyond just words. Today, the Prime Minister must begin to clean out the filthy Augean stable he has created. He should start by confirming that he won’t nominate Owen Paterson, or any other MPs who have been handed suspensions from parliament, for a peerage.”

His comments followed a weekend of speculation over whether Paterson would be placed in the House of Lords following his departure from the Commons. The Labour leader has called on the government to issue a public statement.

Starmer also confirmed on The Andrew Marr Show that he believes former ministers, for a time, and all MPs, while serving, should be banned from paid consultancy jobs.