With the country in the throes of the worst energy crisis since the ‘Iron Lady’ was in power, March 2022 may have been a death knell for one of the most devastating Thatcherite policies ever introduced. And it could not have come at a more important time.

The deregulation of Great Britain’s buses in 1986 has allowed private bus companies to run the network as a Wild West free market for over 35 years. Passengers have been cut out of decision-making, with chief executives free to set fares, routes, timetables and standards to maximise their short-term profits, not community wellbeing.

The move has been so devastating that former UN special rapporteur on extreme poverty Philip Alston found that it had led to “serious human rights impacts”. But something is in the air. Around the country, local leaders are taking serious action to push for buses that put people over profit.

Last month also saw mayors in Liverpool and South Yorkshire move towards delivering the same change for their regions, albeit under immense pressure from local passengers. But these moves pale in comparison to last weeks’ announcement that the Welsh government plans to bring its whole bus network into local, public control.

The proposed changes put the efforts of Westminster and Holyrood to deliver better buses to shame. Instead of leaving each local authority to do an impossible amount of heavy lifting in the face of commercial vested interests, as is the case elsewhere on the island, the Welsh government will introduce public control across the whole country.

The Senedd hopes to go further still with plans to lift the ban on new municipal bus companies, allowing councils to set up new in-house bus operators. This visionary legislation serves as a challenge to Boris Johnson and Nicola Sturgeon who have both given local councils incentives to leave private companies in control of the network.

While Scotland has reversed Margaret Thatcher’s ban on new municipal bus companies, many fear financial and practical constraints will leave councils struggling to make use of the legislation. In a surprise admission, the English National Bus Strategy, published last year, raised concerns that the ban on municipal buses is “ripe for review”. Unfortunately, no review has yet been released.

At a time when people are forced to choose between heating their homes, putting food on the table, or turning down jobs because they can’t afford the travel, a convenient, integrated, and affordable bus network could not be more important.

Labour hopes to gain support in local elections across the whole of Great Britain with a clear answer to the cost of living crisis, caught up in its new slogan: “on your side”. There are few areas that better capture the conflicting interests of ordinary people feeling the pinch and wealthy shareholders profiting during a crisis than this one. Fares are rising across the country and many routes are under threat, despite increased government support.

First Bus has spent much of the last year reassuring its shareholders it will deliver a 10% profit and regular dividends starting in 2022. Even where operators are facing rising costs, they are still finding ways to profit. If operators threaten to cut services, councils often ask how much the operators would charge the public to keep the service running.

According to the Urban Transport Group, operators are inflating their fees by up to 50%, as companies use their monopoly power to “name their price”. When tax rises are already hitting households hard, the power to prevent this waste of public money, through an efficient and publicly owned bus operator, would reassure the public.

At the Welsh Labour conference last month, Keir Starmer declared his plan is to “match” what the Welsh government has achieved across the whole UK. On buses, Welsh Labour has shown that when it comes to the cost-of-living crisis it is firmly on the side of local people, not distant shareholders.

If Labour’s “on your side” slogan is to ring true, this level of ambition for public services that prioritise protecting the public’s pockets over profit-hungry companies must be at its heart. Now is the time to challenge Westminster and Holyrood to empower local authorities with public control as default, with public ownership a feasible option. 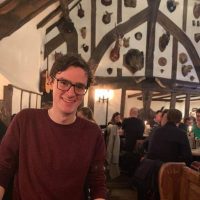 View all articles by Matthew Topham