Is this the most anti-trade union Labour Party ever? Yesterday’s sacking of Sam Tarry from Labour’s frontbench was just the latest in a long string of anti-trade union acts from Keir Starmer’s Labour. But is it deliberate or a huge blunder?

The catalogue keeps growing. Last month, the leader’s office (LOTO) banned frontbenchers from attending RMT picket lines. This, of course, gave the right-wing press a bonanza to play ‘frontbench bingo’ and turn otherwise little-known Labour MPs holding perhaps a parliamentary private secretary role into frontpage news. It was a huge own goal and turned the issue of picket lines into a Labour splits story – legal picket lines, by the way, in a legally run trade dispute in which ordinary working people have democratically voted in the face of some of the most restrictive union laws in the world. TSSA’s representative on the national executive committee asked Starmer if he supported the rail strikes, but the question went unanswered.

In my political role for TSSA, I of course contacted the LOTO to ask whether it was true that frontbenchers had been banned from attending picket lines. I was eventually told that it was late and could they call the next morning. No call ever came and no confirmation of the party’s position was made, despite this Labour-affiliated union having live ballots for industrial action out with members in rail companies and questions from members.

Later that week, David Lammy was out on the Sunday shows for Labour and took the party’s anti-union, anti-worker position further. On live television, the shadow foreign secretary said he “categorically” condemned British Airways check-in staff – who are members of both the Unite and GMB trade unions – in their attempts to claw back pay cut during the pandemic. There was no outreach to unions and no corrections. If a frontbencher had got another piece of Labour policy wrong, they would have been immediately walked through correcting the record.

As chance would have it, affiliated unions were in parliament the next day for meetings on policy with party officials. LOTO’s senior policy aide at least had the decency to front up the issue. She explained that Lammy’s comments had been “clarified” with a Labour source quote and we would be sent it. We weren’t sent it and stakeholder team wasn’t aware of it when I asked. The approach seemed strange to me as, from my own time in the Labour media team, I knew we only used ‘source quotes’ when it was something a little arm’s length. This had been an attack on affiliated union members during a live, legal dispute. What were they thinking?

Things went from bad to worse when Starmer’s senior political aide came to speak to us unions the next day. We thought he was going to reach out, and it seemed that he might actually understand the anger when he opened with: “I know it’s not been easy for unions and your members.” But our hearts sank when he continued with “it’s been 12 years of a Tory government and austerity”. No recognition that Labour politicians and Labour leadership diktats were slapping down low-paid workers and turning solidarity with trade unions into a disciplinary offence. Completely clueless of the damage being done to Labour-trade union relations.

After receiving both barrels from every union in the room, the political director left and calls were made. The next morning, a ‘clarification’ piece appeared in The Mirror. David Lammy had apparently “made a mistake” and admitted he was “not across the details” of the dispute. But this was three days after the comments and after unions making clear how damaging they were. Would another mistake have been left that long? I doubt it.

Fast forward to this week. Monday wasn’t a great start when I heard Rachel Reeves reversing Labour policy on public ownership of rail, mail, energy and water on live radio. On Radio 4’s Today programme she told Justin Webb that Labour is not committed to nationalisation because it “doesn’t stack up against our fiscal rules”. Queue more messages to LOTO, sparking in turn clarifications and reassurance that Labour policy – on rail at least – remained in favour of public ownership. This time, Labour spokesperson (not source) quotes were issued to those journalists who had written up Reeves’ original words from broadcast. Just a slip, perhaps, it can happen.

That peace lasted roughly four hours until Starmer conducted a Q&A after his big economy speech. The Guardian’s liveblog ran with the headline: “Starmer indicates he no longer favours bringing rail companies back into public ownership.” We were told: “I am told they are going to clarify again.” Clarify they did, but the damage was done.

Wednesday was a big day for TSSA. It’s not known as a militant union (apart from when The Daily Mail chooses to describe it as such) so having members out on strike and on picket lines was a big deal. A 5am start – later than many of my colleagues – and we were at Euston batting off the latest supercharged attacks from Grant Shapps and the Tory government. (Also a clarification from Anneleise Dodds’ office that the party chair hadn’t advocated disciplinary action against MPs on picket lines in her morning broadcast round – she’d merely said it was a matter for the whips.)

Sam Tarry was on the picket line and stuck it to the government time and again in broadcast interview after broadcast interview. Standing up for transport workers, giving Labour policy a huge platform and showing solidarity to his friends and former colleagues across the trade union movement. As TSSA’s political officer until his election to parliament in 2019, Sam knows a thing or two about both transport and trade unions.

We all knew it was a risk after the party’s ridiculous position on frontbenchers and picket lines from last month (none of whom were ever disciplined for showing up at a picket line in the end). But sacking Sam from the frontbench turned a media story about a rail dispute into a media circus centred on Labour splits and tipped Labour-union relations to crisis point. As if it wasn’t hard enough already to get clear messages out through the media about the low pay and job cuts facing rail workers. Thanks a bunch.

What I can’t work out is whether this is what Labour wanted. The splits stories, the resignations of trade union members from the party, the straining of the Labour-union link to breaking point, push notifications from every major news outlet and an explosion on social media. It’s not even about Sam as an individual really – much as I respect you Sam! It’s about what that move represents at a time when people are struggling. At a time when the cost-of-living crisis is the number one issue in the country and people want something better, want to be able to pay their bills and live with some dignity and security.

If Labour doesn’t understand that now, then what is it doing? The people who think that being hard on unions will win them plaudits in the media are just wrong. Labour can’t appease the right wing press – the vested interests run too deep. If they want to do that, they need to change party. This is the Labour Party. There’s a clue in the name. 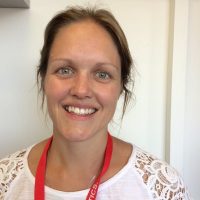 Sian Jones is head of communications at the Transport Salaried Staffs' Association (TSSA) and was formerly head of media at the Labour Party.

View all articles by Sian Jones