When Labour established the NHS in 1948, Nye Bevan said he was going to ‘Tredegarise’ our health service. What he meant was that what he and his comrades in South Wales had developed could be scaled up and delivered across the UK.

In our South Wales valleys in recent years, we’ve been trying to do the same but with one of our industries of the future. In 2018, two Fujitsu employees from my constituency approached me with an idea for a learning hub that would give young people qualifications and work opportunities in cybersecurity. The idea was based on a technical college model, meaning that students could get the skills they needed to head into well-paid jobs without having to go to university.

I visited a similar project in Reading to see how it worked and was impressed. I wanted to get the ball rolling and so began putting together meetings between the local college, cybersecurity experts and businesses. It was during this period that I began to learn what massive industries cybersecurity and digital are.

This is supported by recent research from the Department for Digital, Culture, Media and Sport showing that the demand for cybersecurity professionals has increased significantly over the last year or so. Annually, there is currently an estimated shortfall of around 13,700 cybersecurity personnel. In 2021, there were 153,192 cybersecurity job postings made in the UK – 53,144 for pure cybersecurity roles and 100,048 roles that required cybersecurity skills.

The idea for a course at Coleg Gwent Ebbw Vale began to take shape and opened to students last year. Young people can train there and are guaranteed an interview at one of the firms that partner with the course at the end of it. This is a fantastic pathway into very well-paid, highly-skilled jobs. Young people can get in on the ground floor and soar.

I’m told that the course will now be replicated across other campuses in Gwent. We are lucky in Ebbw Vale to have a burgeoning tech-hub adjacent to the college, with Thales setting up a National Digital Exploitation Centre a stone’s throw away, and also a new ResilientWorks lab making advances in cybersecurity around the supply of electricity and in automated vehicles.

These all form part of the Welsh government’s plans to build a new tech cluster in Blaenau Gwent, funded by Thales and the Welsh government’s Tech Valleys programme and supported by Cardiff University. These are undoubtably the industries of the future and our young people need to be prepared for the jobs that will be opening up.

Where once young people might have gone to Ebbw Vale’s steelworks to start an apprenticeship, they can now begin training as cybersecurity experts. We’ve got the idea, we’ve got the plan, we’ve got the facilities – but we need to build on this.

This model that can be recreated in industrial towns across the UK. Ideas like these, developed in our traditional working-class areas, need to be taken up by our national party as part of our general election manifesto and our promise for the future. 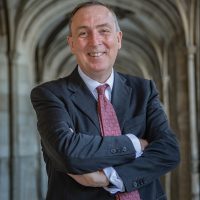 Nick Smith is the Labour MP for Blaenau Gwent.

View all articles by Nick Smith