The Financial Times told us last week that “Britain and the US are poor societies with some very rich people”, putting some analysis behind a suspicion I think many of us have had for a long time. We repeat the reassuring mantra to ourselves that ‘Britain is still a rich country’ in global terms, but too often now this is just the prefix to the phrase – ‘this shouldn’t happen here’.

Children living in freezing homes, crumbling high streets, food banks – it doesn’t feel like a rich country on the up. America has its own, very deep problems, but at least President Joe Biden seems to get that the model has to change, declaring on Twitter: “I am sick and tired of trickle-down economics. It has never worked.”

Meanwhile, as the UK slips into recession, Prime Minister Liz Truss promises a tax cutting programme that she acknowledges will will bring a “disproportionate benefit” to the better off while in almost the same breath saying: “I don’t accept this argument that cutting taxes is somehow unfair.”

The contrast is stark, but it is not new. In the 15 years since the financial crash of 2007, it is obvious that the UK has undergone a great unwinding. Politically motivated choices made by successive Tory leaders, in opposition and in government, have led us down this path. As Truss signals she will join the pantheon of wreckers who led us here, it’s worth reflecting on how they got this far, and the choices that brought us to this point.

On November 18th 2008, David Cameron abandoned his commitment to match the Labour government’s spending plans, drawing a line under his early attempts to rehabilitate the Tory brand by mimicking New Labour’s approach to protecting public services. The new Tory narrative ‘de-globalised’ the crash and pinned the blame squarely on the lapel of Gordon Brown. Cameron and George Osborne deployed folksy household finance analogies to justify their choice to tighten spending at exactly the time it was needed to stimulate the economy. The legacy of this choice has been appalling productivity and sclerotic wage growth.

Austerity – its structure, its scope, its pace – was a choice. Repeated, in-year cuts to local government and criminal justice have left us with degraded services and unsafe streets. The abolition of school and hospital building programmes have left us with dwindling, crumbling facilities. Scrapping grants for home insulation and cutting support for wind- and solar-powered technologies have reduced our long-term energy security.

Capitulation to the forces of English nationalism within (and without) the Conservative Party was a choice. It consigned us, inexorably, to a hard Brexit, unnecessary economic disruption and unprecedented labour shortages, all of which have contributed to the inflationary pressures that threaten to engulf the economy.

Submission to the protean charms of Boris Johnson was a choice. From the constitutional and civil chaos stoked in the late summer and autumn of 2019 to the (ultimately worthless) pork-barrel politics of ‘levelling up’ to the tragedy of his behaviour during the pandemic, Johnson was a threat to many of the intangibles that people respect about Britain. Process, honesty, rules mattered not one jot, and in backing him to the last possible minute, it became clear they did not matter to the Conservative Party, either.

The election of Liz Truss was a choice. The creation of UK mainland tax havens, scrapping the cap on bankers’ bonuses, the abolition of the social care levy, disproportionate tax cuts for the wealthy, the threatened bonfire of workers’ and environmental rights and regulations – these are all choices.

This somehow pre-European, pre-welfare state, even pre-Edwardian conception of British society is a rejection of 80 years of history and social progress, not to mention a repudiation of the spirit of solidarity that blossomed through lockdown. It is not fit for purpose in an era of global connectivity, global threats and global solidarity.

Ahead of conference this weekend, all Labour members should reflect on all this – the damage the Tories have done, and the extent to which we are culpable for allowing it to happen. We must pull together now and offer a credible alternative. Institutional, economic and global relationships, must all be restored, repaired and reformed past the stage of being functional for some, to work for all. Labour is the right choice for the country now. Let’s prove it. 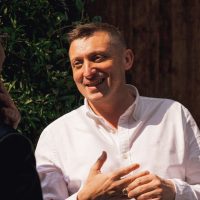