Labour has retained a double-digit poll lead over the Conservatives despite speculation that the election of Liz Truss would see her party enjoy a ‘new-leader bounce’ after she was elected as the Tories’ new leader and the Prime Minister.

According to research published by YouGov this morning, Keir Starmer’s party fell by two percentage points on the last poll to 42% but remained ten points ahead of the Conservatives – who climbed three points to 32%. 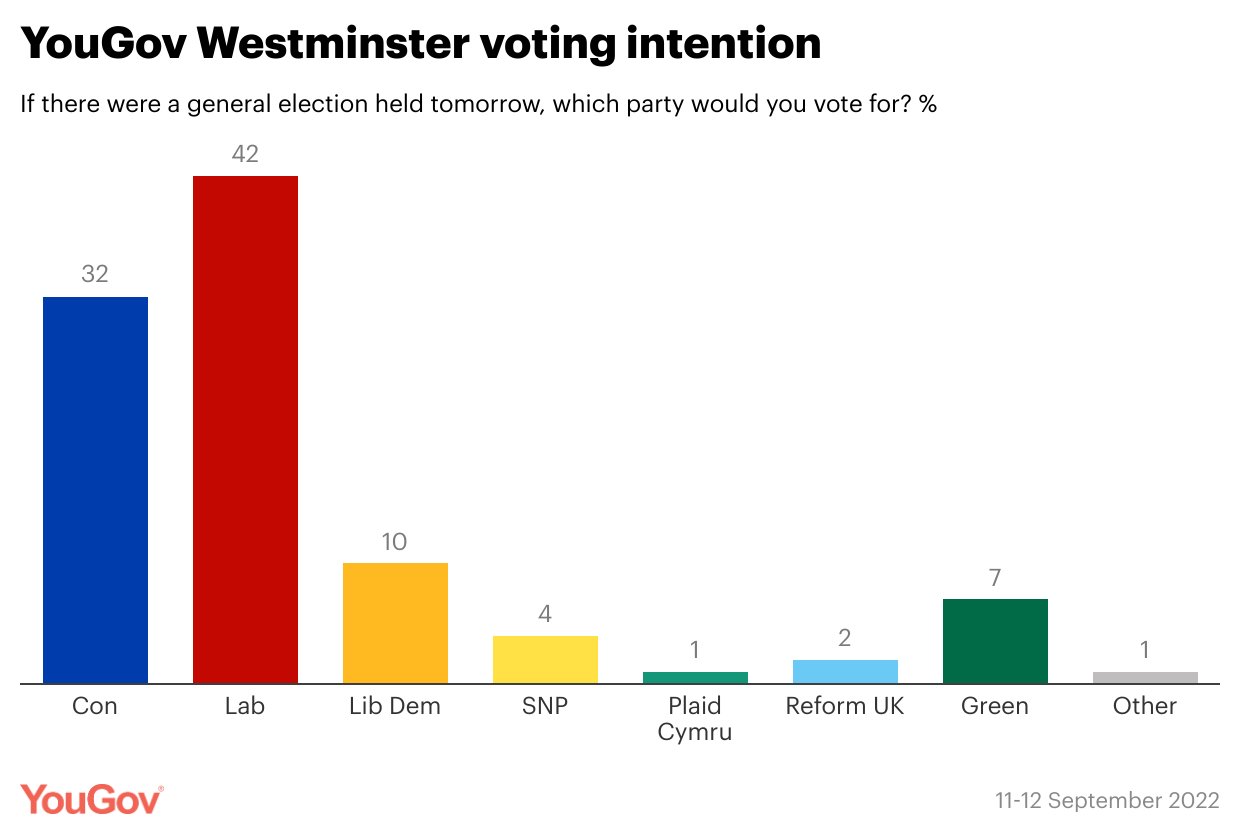 The Lib Dems remained in third place, with 10% of respondents telling researchers that they would back Ed Davey’s party in the event of a general election. The Greens followed up in fourth place, taking 7% of the vote.

According to YouGov, nearly one in ten (9%) 2019 Conservative voters are now supporting the Labour Party, with almost one in four having reporting that they are now undecided (20%) or that they will not to vote at all (3%).

A leaked memo drawn up by Starmer’s director of strategy, Deborah Mattinson, warned in August that Truss could dramatically improve the Tory Party’s electoral fortunes and afford them a double-digit bounce in the polls. It warned, however, that the bounce would be short-lived.

“Our focus groups suggest that as voters get to know Truss better they like her less,” it stated. “Serious negatives – untrustworthiness, inauthenticity, U-turns, lack of grip – are starting to cut through suggesting that any bounce may be very short-lived.”

The memo added: “The poll bounce seems to be a triumph of hope over experience for voters – before reality kicks in. Our focus groups so far suggest that voters who know less about Truss view her more positively. But the more they see of her, the less enamoured they are.”

It concluded: “We have also seen a negative reaction to her apparent lack of concern for ordinary working people – as opposed to the very poor – in the fuel crisis. Tax cuts as an alternative do not hit the spot. This view has been compounded by the leaked ‘grafter’ tape.”

Polling by Savanta, published the end of July, suggested that the Labour Party would secure a comfortable majority in the House of Commons if its findings were borne out at the next general election as it reported that the opposition’s poll lead over the Conservatives had widened to 13 percentage points.

The figures recorded in the Savanta research would have resulted in an overall Commons majority for the Labour Party of around 70 seats, according to the Electoral Calculus prediction website, with the Tories losing around 180 MPs.

Since Truss was revealed as the victor in the Conservative leadership election earlier this month, she announced the long-awaited plan from the government to tackle sky-high energy bills and ease the cost-of-living crisis with a focus on capping prices and boosting domestic energy supplies.

In a statement to parliament, prior to the death of the Queen, Truss announced an “energy price guarantee” of around £2,500 per year. She told MPs that her Chancellor, Kwasi Kwarteng, would make a “fiscal statement” later this month to outline the specifics of the plan and how the energy price freeze would be funded.

Starmer accused the new Prime Minister of “loading the burden” of the cost-of-living crisis on to working people and urged Truss to back Labour’s proposal of funding an energy price cap freeze through an expansion of the windfall tax.

“The real question the government faces, the political question is, who is going to pay,” Starmer told MPs. He said it is “ridiculous” to claim that a windfall tax would deter investment, as Truss has suggested, and argued that the Prime Minister is “driven by dogma, and it’s working people that will pay for that dogma”.

Following the death of the Queen, parliament has been suspended for a period of mourning. Truss’ spokesperson indicated on Monday, however, that MPs are likely to be recalled next week to hold an emergency Budget or ‘fiscal event’.