As the Welsh government’s economy minister, my focus is on securing better jobs and narrowing the skills divide to tackle poverty in a stronger Welsh economy. We badly need a partner in the form of the UK government – but for now we are stuck with an increasingly estranged rival.

This is deeply unhelpful in normal times and unforgivable in this crisis. Even before the leadership contest, major decisions on the future of our economy were being ducked by Tory ministers while the facile gloss of ‘levelling up’ began to crack, leaving some of our poorest communities worse off.

From steel to semi conductors, global disruptions that raise fundamental questions about our economy’s place in the world have failed to hold the attention of enough Tory ministers at once. As a result, risks have been allowed to pile up while opportunities for new jobs in greener industries have been let go.

More than a decade of indecision and disinterest in regional prosperity has only entrenched a form of economic centralism that is both alien to our competitors and corrosive to public trust.

The fresh offer of unfunded tax cuts, bumper bankers’ bonuses, a war on basic workers’ rights, and Mad Max-style ‘low regulation zones’ does nothing to show the world that the UK has learned anything from the last decade. It will do still less to signal that anyone in No 10 is thinking about struggling coastal towns or valleys.

As the economist Duncan Weldon recently pointed out, a mixture of culture wars and politically driven deregulation is not where UK businesses see their future because their competitors are just not moving in that direction.

My discussions with businesses reflect this as they raise the need for purposeful public investment that gives certainty to the sectors that can deliver a more productive economy. That requires long-term partnerships with us linking innovation and investment to better pay and wellbeing. These are the partnerships we are building, strengthened by progressive skills policy which includes the Wales Union Learning Fund – axed in England – and more help for those furthest from the labour market.

This model is closer to the progressive international examples of stronger, more equal economies where the role of subnational government is also integral to their success. This is exactly how we see local government in Wales which is why we have legislated to create powerful new regional bodies with the ability to shape local economic priorities.

Partnership is the defining feature of Welsh Labour’s approach in government. We are now enshrining our social partnership model into law, strengthening a way of working that is wedded to a stronger, fairer, greener economy.

This culture of partnership meant that I could confidently turn down Matt Hancock’s appeal for Wales to join the Serco contract on contact tracing during the pandemic. Instead, we worked with local government and local health boards to design a system that better understood communities, delivering better outcomes at around half the cost.

Those savings meant hundreds of millions could be recycled into more generous support for SMEs via the Wales-only Economic Resilience Fund. A recent survey showed that 85% of businesses asked found this fund as important to their survival as furlough.

Across both examples, people and businesses trusted the services they were being offered. Neither was distant and both had the scale to respond more efficiently. This ability to act also creates the space for a long term focus on priorities that cannot realistically get the oxygen needed in Whitehall. This is a natural fit for major businesses used to working with powerful regional governments in other nations, linking their investment to regional clusters of strength.

Our investment in the Advanced Manufacturing Research Centre (AMRC) in North Wales is a strong example of the strategic commitment we can offer to sectors that deliver good jobs with decent pay. This project is capable of delivering a £4bn boost to the Welsh economy over the next 20 years.

From care to food production, we are also turning the everyday economy around us into new local opportunities. Our Backing Local Firms Fund is just one measure in our mission to deliver better jobs closer to home. Since 2019 the Tory government, however, has been determined to disrupt, override and undermine a devolution process it would dearly love to scrap.

Levelling up has very deliberately meant Wales having less say over less money. Despite the promise to match the size of needs-based EU funds post-Brexit, Wales is set to be over £1.1bn worse off. Tory ministers have even legislated to stop the Welsh government accessing these funds. Delays have dogged the incoherent funds to date but we do know that less money will be targeted based on need as more is thinly spread across more places. All of this means less support can be provided to help those at the sharp end of this crisis.

As Mark Drakeford has argued, this is not about an obsession with the constitution but about standing up to a UK government that tells Wales: ‘You’ll get what you’re given.’ As we look ahead to party conference, UK Labour’s pledges to introduce a new industrial strategy alongside a £28bn Climate Investment Fund is a cause for real optimism. These two pledges alone offer a chance to unlock the potential for a new partnership, with devolution and business, with the strength to challenge the regional inequalities that hold the UK economy back. 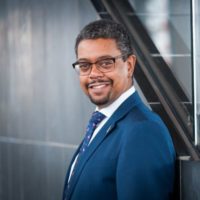 Vaughan Gething is the Senedd member for Cardiff South and Penarth, currently serving as the Welsh government's economy minister.

View all articles by Vaughan Gething