Under this government, women’s health has been consistently treated as an afterthought. Women’s voices have been at best ignored and at worst silenced for far too long, all whilst women’s health services fall into crisis.

With a new female Prime Minister, and a female Health Secretary, can women have some hope that things will improve? They have a low base to start from. This government has a shameful record on women’s health, and we cannot let them use the pandemic to get off the hook.

Take breast cancer waiting times for example. The two-week wait target for referrals has not been met since February 2018. How much longer will women have to put up with this totally unacceptable standard?

The pandemic exacerbated already existing inequalities, particularly for the most vulnerable women in our society. In 2019, women in the most deprived areas were 3.5 times more likely to die from an avoidable cause than those in the least deprived areas. A quarter of black women surveyed by Five Times More felt that they received a poor or very poor standard of care during pregnancy, labour and post-natal care.

So, what was the response from Thérèse Coffey MP, the new Health Secretary? To scrap the health inequalities white paper. If a decision showed the “levelling up” agenda was finished, it was this. It is symbolic of a government that has fallen short on improving women’s health at every opportunity.

If we need any further indication of just how short this government can fall, we need look no further than the Women’s Health Strategy. It has no plan to address spiralling waiting lists, no plan to improve standards in maternity care and nothing to address the chronic shortage of midwives. It simply is not good enough.

Gynaecology waiting lists have grown by over 70% since the start of the pandemic. Half of women with endometriosis had to face five visits to their GP before finally getting the referral to a specialist they needed. Whilst commitments to research in the strategy are welcome, where is the urgency to meet the scale of the crisis now, which is plain for us all to see?

Things don’t have to be this way. Under a Labour government, we will deliver real investment in women’s health and maternity services, with Conference seeing announcements on the biggest expansion of our NHS workforce for a generation.

There might be new faces at the top, but the attitude of the Conservatives remains the same. Only Labour will ensure women’s health services have the staff, resources and technology they need to get women seen on time. 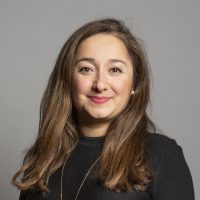 Feryal Clark is the Labour MP for Enfield North and the shadow minister for primary care and patient safety.

View all articles by Feryal Clark