Momentum has helped build a powerful movement for socialism since 2015. Founded at the start of the Jeremy Corbyn years, we swept socialists to power across the country and mobilised hundreds of thousands to campaign for a radical Labour government that would rewire the country in the interests of the many.

In 2017, our people-powered movement rose to the brink of government, denying the Tories their majority despite sabotage from our own side (since confirmed by the Forde report) and intense hostility from the mass media. We achieved incredible things despite the weight of the establishment against us. We helped revive popular socialist policies like public ownership, which are now mainstream in the country.

But Keir Starmer’s time as leader has been tough for our movement. Tens of thousands of socialists have been driven out of the party as the Labour leadership moves ever further right, abandoning the policy pledges and broad coalition that Keir Starmer was elected on, while pursuing waves of proscriptions and expulsions, and unfairly suspending the whip from Jeremy Corbyn.

The latest stage of Starmer’s purge involves mass blocking of local, trade union-backed Parliamentary candidates from the left and ‘soft left’, in order to get “Keir’s people” in. This comes despite Starmer once promising to democratise candidate selections and ‘end factionalism’. After our persistent exposure of this purge, we are starting to see the beginnings of a backlash across the party to this authoritarian approach.

Nonetheless, these are challenging times. Indeed, as our fundraiser launched today reveals, Momentum is facing the twin pains of soaring inflation and Starmer’s attacks on the left. In this situation, many on the left have been asking themselves: what’s the point? But as difficult as things are for socialists in the Labour Party, there is still vital work that can be done and is being done by Momentum and our activists on the ground, laying the foundations for a socialist future.

Our plan is simple: build for the long-term. Since 2019, we’ve got hundreds of activists trained, selected and elected as Labour councillors with a record number of socialists elected in 2022, replacing Tories with socialists across the country; we’ve developed a Community Wealth Building toolkit, and trained local leaders to lay the foundations of municipal socialism through local government; we’ve won Young Labour (twice) and the new National Labour Students for the left, providing bases to build up the next generation of socialist organisers; and we’ve helped get inspirational socialist MPs like Zarah Sultana reselected.

Indeed, whether it is Bell Ribeiro-Addy and Nadia Whittome in parliament, Jess Barnard on the national executive committee (NEC) or Nabeela Mowlana leading Young Labour, the left has brilliant young leaders we can look to for the future. And, as Ian Byrne’s successful reselection battle confirmed, our movement can beat back the Leadership’s attacks on our figureheads.

All of this matters. Protecting our socialist figureheads and institutions matters. Building up a viable path to socialism in Britain matters. And if Momentum isn’t there to do this work, no one will be.

But we’re not resting on our laurels. In the coming months and years, we will be defending and strengthening left power bases by working with socialists in positions of power and electing more alongside them, in local government and in the party. From Wandsworth to Worthing to Preston, socialists in Labour local government are making transformative change for their communities – and building power for the long term.

We won’t stop there. We will also continue to develop a new generation of socialist organisers on the ground through our leadership training programmes, and we’ll continue to link up with trade unions and social movements to make sure their demands are taken into the Party, as we have done with our Labour for labour campaign. And of course, we’ll be working to boot out the most right-wing Tory government in decades, and mobilising to select and elect socialist Labour MPs come the next election, from Chingford to Coventry.

The right-wing Labour machine may be doing all it can to impede us, but our movement has one very important thing on our side: public opinion. As the public turns decisively against a failed, unequal economic system, embodied in Truss’ disastrous mini-budget and the Tory cost-of-living crisis, left-wing policies are enjoying huge public support. The electorate is crying out for change from 12 years of Tory failure – witness the poll ratings of policies like public ownership, £15 p/h minimum wage and a Green New Deal – but tepid managerialism won’t sate this thirst for change. That’s why the Left must be organised and it must be fit for the future.

As long as the clamour for transformative change in the country does not go away, then neither will we. Under the first-past-the-post electoral system, any path to transformative socialist change in the interests of the many runs through Labour. But if we are to succeed, then we will need some help along the way – given our lack of big money donors, our ability to keep organising for a socialist future depends on direct support from our members. This is what powered Jeremy’s leadership and it’s what powers us.

Hilary Schan is co-chair of Momentum.

View all articles by Hilary Schan 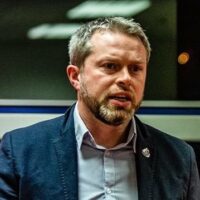 Andrew Scattergood is the West Midlands regional secretary of the Fire Brigades Union and a former co-chair of Momentum.