There are moments in our shared history when the tide turns against those in charge. These are moments when the moral destitution of their regime is laid bare, where the poverty of their ideas is unmasked. At such moments we may clearly say: it’s over, they failed, it’s time for change. One such moment is this week’s demolition of our beloved Redcar blast furnace on Teesside.

Many reading this will remember the SSI steelworks closure in 2015 and the suffering it caused local steel workers, with the loss of some 2,000 jobs. The steelworks passed through various owners but the blast furnace, which at its peak was the second largest producer of steel in Europe, never fired again.

Fast-forward to this week, and this relic of our grand industrial past has been demolished. It is a moment of genuine emotion for those of us up here who have lived our lives in the shadow of the great steelworks and who derived a sense of identity and pride from its work. Many have already shared their reflections on this moment with grace: see this, for example, from former Labour Redcar MP Anna Turley, who was at the forefront of the campaign to prevent demolition. She recalled the many acts of kindness that followed as families feared for their futures, their children feared for their christmases and our community came together to provide food, shelter and gifts.

Now we fight for the future. Redcar’s submarine Conservative MP Jacob Young decided to pop up in the local press to comment on the closure. His solution? Designate the area as a free port. This is just about as ridiculous as it gets. I’ve written previously about how the Tees Valley free port, argued for by Prime Minister Rishi Sunak in his backbench days, is a mirage. His own paper on the matter was a melange of questionable statistics, untenable comparisons and bad maths. The penchant for such questionable numbers persists among Mr Young and his fellow free port fanatics to this day. The certainty we do have about free ports is that they portend a future of reduced working rights, an enlarged playground for fleecers and fencers and, if the longitudinal statistics hold, little to no net gain in employment or economic benefit. Such is the legacy for these Teesside Tories and the wider Conservative party, who have hitched their wagon to a dud.

Moreover, this avoids the real issues that attend the transition of our industrial communities to a greener future. There are precedents, folks who have done this well, research and studies covering years of ‘just transition’ among former coal-mining towns in Germany’s Saarland, in Nordrhein-Westphalia among other places. When I was director of economics at the RSA, we researched this kind of just transition. This is an alternative that is rooted in Labour values of democracy, solidarity and community, and stands in stark contrast to the feckless Trussite nostrum of ‘make it into a free port’.

Here are three principles that underpin the alternative:

First, democratise. We recognise that industrial heritage is a shared, cultural asset. A Labour alternative would enable local councillors, civil society and communities to engage in open, democratic conversation about the future, about what just transition looks like to them. There are multiple examples of citizens assemblies in the Saarland giving lawmakers information and ideas about market-matching local skills with new industries, to name but one. It’s an act of rare negligence to not involve citizens in discussions like these about our future.

Secondly, plan. A just transition framework, with a plan for local economic growth, for good work, and workers rights, that captures and enhances local skills bases is the minimum duty of government. This is a duty that local Tories have shirked over and again, and that Labour will remedy and revive.

Thirdly, commemorate. I’m old enough to remember when conservatism claimed to not be about riding roughshod over our past, but conserving it. Let’s consign this posturing to the dustbin once and for all. It’s for Labour to open a genuine conversation within our communities about the history we’ve had, the way our people wish to commemorate it and the lessons we’ll learn as we move into the future. Contrast that with the Tory way: press a button, blow it up, to hell the consequences.

This is a sad moment, no doubt. But for my part, the sadness is permeated with determination. We’ve allowed the Teesside Tories one final act of desecration on our community. Let that be a lesson to us: never again. Where they’ve blow-up, we must rebuild. That’s the Labour promise on Teesside. 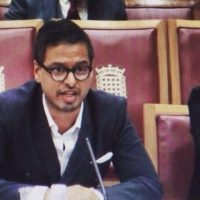 Ash Singh is a social and technology entrepreneur, former director of economics at the RSA and former chief executive at third sector trade body Acevo. He is the author of The Moral Marketplace and lives in Stockton-on-Tees.

View all articles by Ash Singh