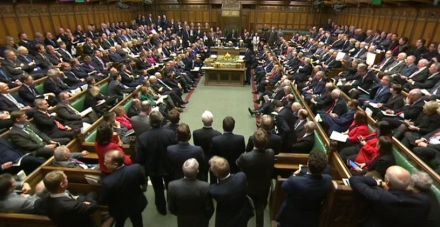 Was today a good PMQs for Labour and Ed Miliband? No it was not. But it was hardly likely to be after the week the party have had. As Nick Robinson so deftly explained on the Daily Politics afterwards, Tory HQ and the right-wing press have got their mates lined up to attack Miliband this week, and in terms of bad front pages it has been an effective strategy. Add in the dreadful Scotland poll released this morning and you have a Labour Party that is feeling pretty unhappy with three months to go until election day.

This has been the pre-planned Tory strategy for years now. Throw a bucketload of excrement at Labour and see what sticks. Swiftboat. Repeat words like “weird” until they get into the national bloodstream. It’s political poison, but if poison has one universal feature it’s that it’s effective. It’s a cowards weapon, but it’s effective.

So today Ed Miliband walked into the eye of the storm, and decided to deviate from his recent strategy of talking about the NHS. This week he wanted to know about the Tory Party’s links to hedge funds – who have donated nearly £50 million into Tory Party coffers – and whether there was, perchance, any link between those donations and the tax benefits this government have bestowed on said hedge funds.

This being Prime Minister’s Questions, the PM did what was expected of him, and ignored this tricky and uncomfortable question. Don’t worry, I won’t explode about that – again.

So Miliband asked again. That’s a tactic that can work – does work – but only if you do it properly. If you must repeat the same question over and over, keep it short – a single sentence. Repeat that sentence every time you stand up, and only that sentence. Let the PM bluster, smear and obfuscate. Let him talk around and avoid the question. But when you stand up, just ask the same simple question again without flourish or embellishment. Pretty soon, you don’t need to say that Cameron is being evasive, his evasiveness will be displayed in glorious technicolour.

Instead, Miliband sort of asked the same question a few times but waffled on a bit each time in a way that added little to his attacks but blunted their effectiveness by giving the PM another chance to avoid the question.

An opportunity missed. It was like the Two Ronnies Mastermind sketch where the questions and answers are out of sync.

Because whilst the substance of Miliband’s attack was right – and is potentially toxic for the Tory Party (sticking up for your privileged mates and helping our your rich donors are both attacks that hurt the Tories if they can be proven) – yet he lost on style. Because Miliband might have missed his opportunity to be clinical, but Cameron didn’t miss his chance to be brutal. He preened and strutted like a prize peacock. His face grew red and angry as his thinning hair flopped about. But he landed mocking blows on Miliband and Balls with alarming regularity – including the only witty joke he’s managed in ages “Bill somebody isn’t a person, it’s Labour’s policy”. Boom boom. He even quoted Jim Murphy. Why? Because he wants to help the SNP of course. Their success in Scotland is his route to Downing Street. The long and short of it though is that Cameron gave the better performance.

But what is it that matters in PMQs? Is it the chamber itself or the story on the evening news? Because if it’s the latter then Miliband may have landed a blow after all. On the Daily politics after PMQs, Andrew Neil put Tory Minister Penny Morduant under considerable pressure over the Tories help for hedge funds, and her party’s close links to the hedge fund world. She had no answer to the charge that the Tories get donations in return a cosy relationship with hedge funds – other that parotting that this is a charge that will be made against the party.

Damn right it is.

And if Miliband’s questions get any traction over the course of the day, Cameron’s performance in the chamber might not look so clever after all.