The fourth message from our Independent Review is that Labour has never been so far from political reality for a generation. On a series of measures on the economy, business and welfare, Labour has marched decisively away from the views of voters in each of the last two general elections, but particularly in May, 2015.

You can find the first three of our Inquiry messages here, here, and here. Our polling is based on a representative sample of 3000 English and Welsh voters using the YouGov panel and analysed by The Campaign Company.

Increasingly Labour attracts voters who want to see redistribution of wealth from rich to poor but who also hold views that are out of step with the wider electorate. This reinforces the Inquiry’s finding of a growing cultural divide between the socially liberal, progressive Labour Party and its 2015 voters, and large parts of the electorate who either  vote pragmatically or who are socially conservative.

This divide is growing and it is evident across a number of areas that are fundamental to the Party’s electoral prospects: the deficit, the welfare system, public services, personal financial interest, and business. I’ll take each in turn, beginning with wealth redistribution.

Labour voters have consistently been more committed to redistribution than the voters of other parties, but this has become even more pronounced since 2005.  72 per cent of 2015 Labour agree that they are ‘most likely to vote for the political party that redistributes wealth from rich to poor’ against 43 per cent of the wider electorate who agree and 22 per cent who disagree. 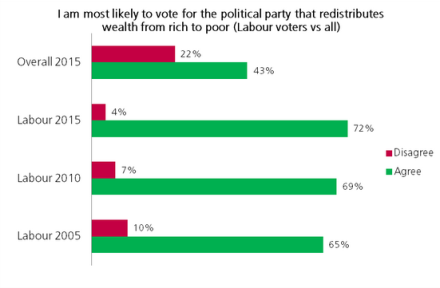 Our first Inquiry message was about the deficit. 58 per cent of the electorate agree with the statement, ‘we must live within our means, so cutting the deficit is the top priority’, against16 per cent who disagree with it. We can also identify the changing attitude of Labour voters to this statement over the period since 2005. 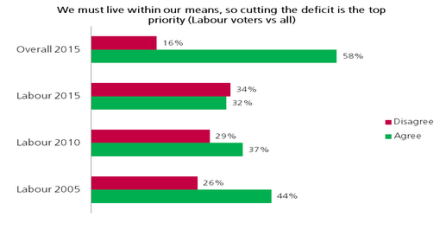 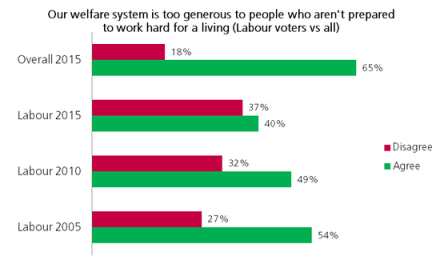 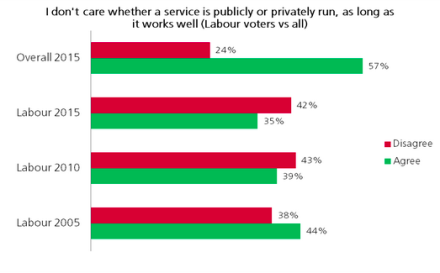 The growing distance between Labour and the 2015 electorate is also reflected in attitudes toward financial self-interest. 44 per cent of the electorate agree that they are, ‘most likely to vote for the political party that puts my financial interests first’, against 17 per cent who disagree.

41 per cent of 2005 Labour voters also agree with this statement against 24 per cent who disagree. But among 2015 Labour voters 36 per cent agree and 27 per cent disagree. As we identified in the third Inquiry message this reflects Labour’s loss of pragmatic voters whose principal interest is their aspiration. 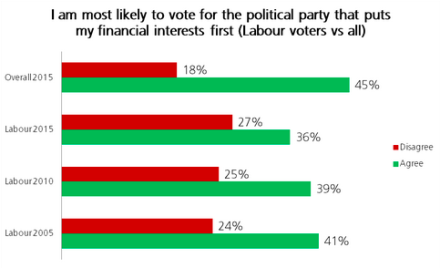 Finally in attitudes toward business, 49 per cent of the 2015 electorate agree that they are, ‘most likely to vote for the political party that knows the importance of supporting businesses to grow’. Just 10 per cent disagree. 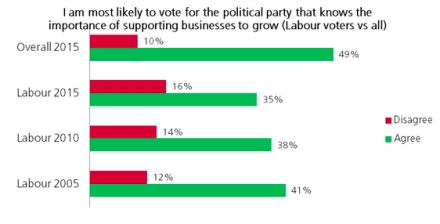 To get a better sense of people’s feelings about the political parties, we asked the 3000 people we polled: ‘what was the main reason you voted for party x?’ This was an open question and these are some of the reasons people gave for why they would not vote Labour:

‘Give everyone who isn’t working as much money as they want from the people who work their asses off. Let everyone in the country.’

‘A free for all on benefits.’

‘Will spend all your taxes on benefit scroungers !!!!’

‘Tax those that work and pay high benefits to those who don’t want to work.’

These remarks, often heard on doorsteps, reflect the shockingly high number of voters who view Labour as the party of benefits rather than the party of work and working people. Labour stands on the brink of becoming a party of sectional interests irrelevant to the majority of working people in the country.