Stella Creasy is the favourite to win Labour’s deputy leadership contest among LabourList readers. This week’s survey, the last before the results are announced this weekend, saw Creasy come top in the deputy leader question with 34% of the vote.

Tom Watson, widely tipped as favourite before tomorrow’s result, came second in the survey with 26%, five points ahead of Angela Eagle on 21%. Caroline Flint, who earned the second most nominations from MPs, received 12% of the vote, and Ben Bradshaw received 8%. 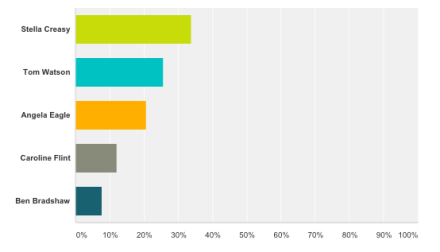 However, if this scenario were to be recreated in the final result tomorrow, the race would probably come down to a close final run-off between Creasy and Watson – something many imagine will happen anyway. It is the second time Creasy has seen a lead in our surveys, increasing her share of the vote from 31% last time we asked readers on the subject. The time before that, in June, Tom Watson had held a six point lead.

Walthamstow MP Creasy does see a crossover of support with Corbyn in our surveys – will this be a pattern that is reflected on a wider scale in the final result?

2,999 people took part in this week’s survey. Thanks to everyone who voted.