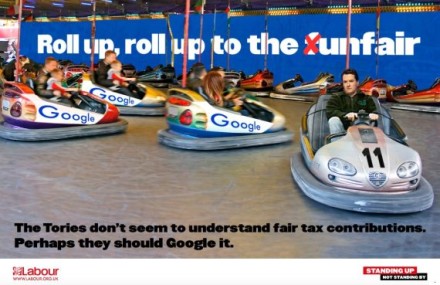 Labour has sought to capitalise on the “sweetheart” tax deal between Google and George Osborne by putting it at the centre of a new advertising campaign.

The posters and accompanying clip, released over the weekend, depict dodgems, with Google speeding past an oblivious Chancellor. Another bears the slogan “The Tories don’t seem to understand fair tax contributions. Perhaps they should Google it.”

The posters bear the slogan “Standing Up, Not Standing By” – the phrase rumoured to be Labour’s local election slogan – and generated a mixed opinion among members and former Labour staff on social media.

Standing up, not standing by: Join us campaigning on our Economy Action Day next weekend. https://t.co/N3JjkQAyHP pic.twitter.com/CqXRN2TODi

George Osborne was criticised from both Labour and members of his party for the effective 3 per cent rate of corporation tax he levied on Google.

Shadow Chancellor John McDonnell has made tackling tax avoidance a key policy since the deal, criticising Osborne, publishing his own tax return and pledging a clampdown on tax loopholes.