The starting gun has officially been fired on the referendum campaign, and in ten weeks‘ time we’ll know the result. During the campaign, Labour MEPs will continue to make the case for our membership, and demonstrate the difference Labour makes in Europe, as we have done this week, in the fight against terrorism and tax evasion.

Last week in Strasbourg, the European Parliament voted for new EU laws to combat terrorism, and the European Commission announced new proposals to tackle tax-dodging – issues on which Labour MEPs have led calls for action and secured parliamentary and Commission backing.

Labour’s Claude Moraes MEP, chair of the civil liberties committee, has been instrumental in securing the package on PNR and data protection. Labour MEPs believe PNR, though not a silver bullet, can be a useful tool in the fight against terrorism if the data collected is used and shared effectively by law enforcement agencies, and ensures EU citizens’ privacy is protected.

And on tax, the Commission this week announced measures to tackle tax avoidance and evasion by multinational corporations, including public country-by-country reporting and a common list of tax havens – measures proposed by Labour and backed by MEPs.

By making companies publicly declare where they make their profits and where they pay their tax, the new plans aim to ensure they play by the same rules throughout Europe. And the new list of tax havens, which will be based on objective criteria, will deliver greater transparency.

On all these issues, and more, it is only by co-operating with other countries that we can best achieve change, and deliver a fairer, safer society.

As Jeremy Corbyn made clear yesterday, and as Unison have come out and said this week, the best way to protect our rights and jobs is to be in the European Union – just imagine a post-Brexit world in which the likes of Michael Gove, Iain Duncan Smith and Boris Johnson are in charge. Would we be safer? Would our workplace rights be protected? Would our jobs be secure?

And would the NHS receive an extra £350m a week if we left the EU, the latest myth the Leave campaign are peddling? The answer to all these questions is of course no. More money for the NHS? The hypocrisy of these right-wing shrink-the-state Tories is staggering. There are no circumstances under which working people will be better off or safer outside the EU – especially not under a hard-right Tory government.

Over the next ten weeks, Labour MEPs will continue to work hard in Brussels, Strasbourg and in our constituencies, and, along with Jeremy Corbyn, Alan Johnson, Labour Party members, activists and trade unionists, will continue to make the case for our membership of the European Union. It’s a fight we cannot and will not lose.

Glenis Willmott is leader of the European Parliamentary Labour Party 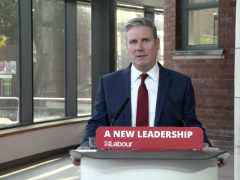