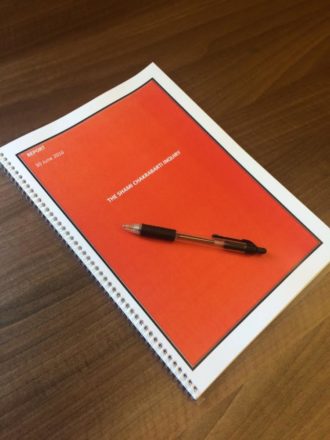 There’s nothing quite like snatching defeat from the jaws of victory. On a day in which at least one major milestone in the fight against anti-Semitism in the Labour party was achieved the news has, instead, focussed on the mishandling and outrageous racism at the launch event.

Many outlets reported Jeremy Corbyn’s apparent equation of Israel and ISIS. Any correlation between the two would be wrong and offensive. His office claim he was misquoted and to me, his language was clumsy but then Jeremy never was a great wordsmith. However he did state, for the first time quite explicitly, that there was certain behaviour that should not be welcome in the Labour party and that for example the word “Zio” was a racist epithet that has no place in our party. It was shameful that a Momentum activist, took the opportunity to launch into one of the oldest anti-Semitic tropes as part of an attack on Ruth Smeeth. The unwelcoming environment for Jews remains and the press had the perfect example of just how it plays out.

Thankfully in the Chakrabarti report there are some helpful routes out of this mess. I met Shami Chakrabarti as chair of the All-Party Parliamentary Group Against Antisemitism to talk to her about our previous work and to suggest some key issues I believed required address. I am delighted that every single one of the proposals I made in included in her report.

The most important recommendation relates to the use of the word “Zio”. Chakrabarti has suggested this should be treated in the same way as other racial epithets – the ‘N’ word or the ‘P’ word. In addition she advises the term “Zionist” be used “advisedly, carefully and never euphemistically or as part of personal abuse”. The Labour party must now always see pejorative use of that word as an immediate disciplinary measure. This fundamentally shifts the debate on the Middle East and cleanses the discourse that has become so polluted.

I also recommended that Chakrabarti address misuse and abuse of the Holocaust and tackle other anti-Semitic tropes. On this she is unequivocal. “In day-to-day political debate, it is always incendiary to compare the actions of Jewish people or institutions anywhere in the world to those of Hitler or the Nazis or to the perpetration of the Holocaust. Indeed such remarks can only be intended to be incendiary rather than persuasive”. She recommends that “Labour members resist the use of Hitler, Nazi and Holocaust metaphors, distortions and comparisons in debates about Israel-Palestine in particular” and further recommends that “excuse for, denial, approval or minimisation of the Holocaust and attempts to blur responsibility for it, have no place in the Labour Party”. Whilst she rightly wouldn’t address the Ken Livingstone case for fear of prejudicing the inquiry into his conduct, this approach shows just how offensive his remarks were. As if to underline this Chakrabarti also argues that “any seasoned activist who says that they are completely unaware of any such discourse must be wholly insensitive or completely in denial”. Quite.

The other key recommendation I made to Chakrabarti was that the MacPherson principle of defining racism should be the starting point for addressing anti-Semitism. That is, that complaints from someone subjected to racial abuse should be recorded as such, taken seriously and handled sensitively. That is exactly what Chakrabarti recommends. In this case, it is self-evident that the go-to body should be the Jewish Labour Movement and it is unfortunate that this was not spelled out explicitly in the report.

There are other important changes she recommends. Her suggestions for rule changes are welcome. De-politicising the investigatory and disciplinary processes by shifting power from the NEC to the NCC is wise. In addition, I – like Chakrabarti – am opposed to lifetime bans which I think set the wrong threshold for action. Ultimately, with her proposed changes, transparency will increase and confidence will grow. Of course there are some concerns about suspensions and other details but these will no doubt be addressed in due course. In addition, the Jewish Labour Movement needs to be brought into the process to a greater extent than recommended in the report and the training on anti-Semitism should be undertaken with expert advice from the CST.

This report will be around for longer than Momentum or Jeremy Corbyn. It is crucial we see full, consistent and detailed implementation immediately.

John Mann is MP for Bassetlaw.

View all articles by John Mann