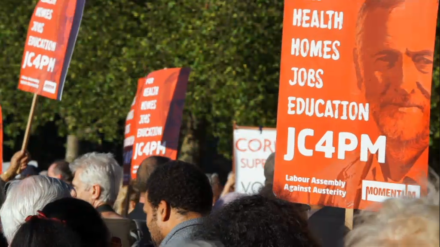 Last night the much-anticipated Dispatches documentary on Momentum aired on Channel 4. Many had braced themselves for a highly controversial piece of television. But this attempt to smear the Corbynista group turned out to be a failed hatchet job.

Dispatches was billed as a piece of hard-hitting investigative journalism. Instead, the episode’s highlights included an undercover reporter “secretly” filming a public meeting and allegations that the group had breached some data protection rules. The latter is not unimportant but unfortunately it is common among political parties. That doesn’t make it OK but I’m afraid it doesn’t rank as a shocking revelation.

The programme paid quite a lot of attention to the Alliance for Workers Liberty party (AWL). In particular they showed, Jill Mountford, who is on Momentum’s steering committee, at one of the group’s meeting. Mountford was expelled from Labour for her links to the AWL and, since Momentum members don’t have to be Labour Party members, there is nothing saying she should be excluded from the group’s work.

The reason for focussing on this controversy was to imply that there are lots of “hard-left Trots” who are the driving force behind Momentum. But groups like AWL have a tiny number of backers – not enough people to make up all of Momentum’s membership. The vast majority of Momentum members are not Trots just like most of the members Labour has picked up in the past year aren’t rabid, Militantesque lefties. This was not explosive TV.  Even discredited Tory MP Zac Goldsmith derided the documentary as “weak”.

These kinds of attacks on Momentum are unhelpful. The Dispatches documentary came directly after a needless furore around the pro-Corbyn group’s new initiative, Momentum Kids. The plan, thought up by two mums from Stroud, is to roll out breakfast clubs, after-school sessions and childcare facilities to make it easier for single parents (the vast majority of whom are women) and people on low pay get involved in Momentum. They also want to run political education classes for young people. This was met with cries of “indoctrination”, as if people with politically active parents aren’t already exposed to their views. People outraged at the formation of Momentum Kids seem to think that if you talk to children about political ideas they’ll grow up incapable of disagreeing with you. Instead of sneering at this initiative, it would be better to see it for what it is: a plan to help women, in particular, get involved in politics.

Now, talk of de-selection from some Corbyn supporters is certainly unhelpful and there is a small vocal minority who hurl abuse at MPs and people who voice any criticisms of Corbyn.

All of this is serious. But these people do not make up the majority. Most Corbyn supporters and Momentum activists are decent people who want to form a movement and pursue an agenda that will achieve social justice. They watched politicians deregulate the financial industry, which led to a disastrous recession and unnecessary austerity measures; or have witnessed successive governments fail to invest in social housing, fuelling the current crisis in affordable homes.  They are tired that talk of public ownership is treated as an advocacy of full-blown Communism and fed up of people in power ignoring the environmental degradation that brought about by climate change. Ultimately, Momentum wants to engage people with a politics that will challenge all of this.

The people who head up Momentum are decent individuals, who want to change politics for the better. Dispatches showed there isn’t a more sinister story behind the scenes.