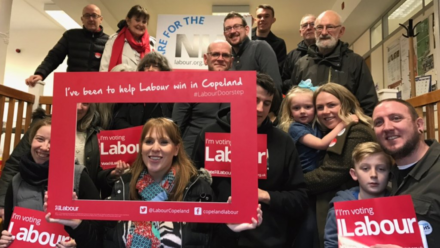 Jeremy Corbyn and a host of current and former frontbenchers including Angela Rayner and Dan Jarvis have joined the campaign in Copeland.

The Labour leader went to meet members and candidates in the West Cumbria seat yesterday. Labour has yet to indicate the date of the by-election but last week shortlisted three local women as contenders to defend Jamie Reed’s 2,564 majority.

Corbyn’s visit to Copeland came as Jarvis, a former shadow minister, and Cat Smith, the shadow deputy leader of the House, joined activists on the doorstep yesterday. Rayner, the shadow education secretary, was also in the constituency on Saturday.

“A great honour today as I open the LabourCopeland HQ. We are ready and campaigning,” she wrote on Twitter.

The local party held seven campaign sessions in the seat on what it described as “Super Saturday”.

It comes as the Tories flood the seat with activists in the hope of making Corbyn the first Opposition leader for decades to relinquish a seat in a by-election.

Several other Labour MPs could step down because they are frustrated over the party’s progress under Corbyn, it was claimed over the weekend, but the leader said he is “not expecting” any other departures.

Tristram Hunt announced on Friday he would quit as an MP to become director of the Victoria and Albert Musuem. Paul Nuttall, the new UKIP leader, has been urged to stand by colleagues in his own party who need a big-hitter if they are to have any prospect of realising their dream and seizing the Stoke-on-Trent Central seat from Labour.