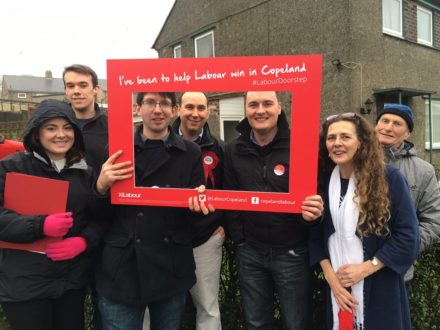 MPs, former advisors to the Blair government and a council leader have made the trip to Copeland to lend their weight to Labour’s campaigning efforts in the hotly-contested seat.

Wes Streeting headed to the constituency with his mother and later described the level of public “concern” over the future of the workings of West Cumberland Hospital. Some of the maternity services are set to be moved to Carlisle, which could force some mums to make an 80-mile round trip to the city.

Streeting, the MP for Ilford North, was joined in Copeland by Progress deputy director Matt Faulding. Other figures out on the doorstep with them were Lord Liddle, Cumbria councillor and former Europe advisor to Tony Blair, and Matthew Doyle, who has also worked for the prime minister during his time in ofice.

Streeting was seen in a picture with the former MP for Dunfermline and West Fife, Thomas Docherty, who has been linked to the candidacy for the seat. The deadline for applications passed this morning.

John Woodcock, MP for nearby Barrow-in-Furness, visited Copeland with a group of activists from his constituency, tweeting:

Copeland’s campaign centre is open every day from 9.30am to 7.30pm. Activists can arrive anytime to help out – Phoenix Court, Earl Street, Cleator Moor, CA25 5AV.