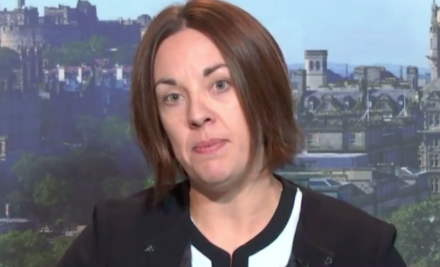 The SNP has only one agenda even though the case for Scottish independence has weakened, Kezia Dugdale said today, as she tried to clarify Jeremy Corbyn’s controversial comments on a second referendum.

Dugdale strongly criticised first minister Nicola Sturgeon’s plans, saying that the economic case for independence has deteriorated since the last vote in 2014, and that Scotland would run a deficit of £15bn if it were to go alone.

Speaking on the BBC’s Daily Politics, Dugdale, the Scottish Labour leader said: “It’s laughable the idea that Nicola Sturgeon was scrabbling about for reasons to have another independence referendum – its all she’s ever wanted, its what her entire political life has been about.”

Dugdale accepted that there are many voters who are angry at the Tories and Brexit, but she was clear that the economic case did not add up: “[you] only need to look at the oil price for that”.

She rounded her attack on SNP MP Tommy Sheppard, who also appeared on the show, saying: “What angers me most about this independence debate is the false hope that people like Tommy offer his constituents.”

“[He] tries to say to them we can have a better welfare system, we’ll have more money for schools and hospitals – when they [the SNP] completely fail to address the reality that the economic case for independence has fallen apart.”

“That is a blatant lie to some of the poorest people in Scotland and its high time Tommy Sheppard stopped pushing it.”