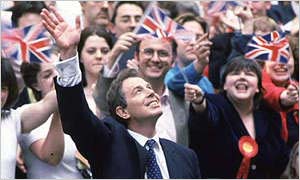 Labour has devised a new campaign message for the local and regional elections in May.

“Standing up for you” is a simple, bold message which is potentially memorable. However it also demonstrates the underlying challenge facing Labour as a national party. It suggests that Labour is a party of protest rather than a party with a clear vision for the country. In national politics, people tend to support protest but vote for vision.

However, we should remember this phrase was intended for local and regional elections – rather than the general – and they tend to be won through local issues, often via protest. I’m connecting the two is because people also tend to look at Westminster when considering the local candidate.

I’ve said previously said that the cut-through vision for Labour would be to advocate security, and I meant that in terms of jobs and housing. There are policies that can achieve this, many of which Labour already propose. These include direct state involvement in house building and removing incentives for workers to be hired as suppliers rather than paid as employees.

In 2010 the Tory message was a simple “It’s time for change”. It’s worth remembering that this was a more influential message than their policy of deficit reduction. Under Ed Miliband, Labour was dogged by deficit reduction, but this wasn’t the main reason people voted for the Tories. They just wanted new faces.

Labour’s 2010 slogan was “We will protect your police, your national health service and your schools”. It was an anti-austerity message, matching out Keynesian economic policy. Although this slogan was a mouthful, it played better than the vague but lyrical “A future fair for all”.

In 2015, Cameron won comfortably with the slogan “A brighter more secure future”. In this context “security” meant the policy of deficit reduction. Along with the picture of a straight road it intended to convey that the hard times were almost done and stability would be the reward. Make of that what you want.

In 2015, Ed Miliband’s slogan was a “Better Plan for a Better Future”. It was intended to attack the Tories’ austerity policy but without the confidence to do so directly. Instead they conjured an image of lots of policy wonks working on the notion. This was weak to say the least.

Meanwhile Ukip’s 2015 slogan was “Believe in Britain”. Dog whistle aside, it offers such simple patriotism that it makes me wonder how Labour and the Tories managed to leave space for such a niche.

In 1997 Tony Blair offered himself as a candidate of change: “Because Britain Deserves Better”. It seemed to answer a question on the nation’s mind as John Major’s shambolic government humiliated the country. Blair’s win electrified the nation with a sweeping sense of change, then it somewhat went to his head as he invited Oasis to 10 Downing Street in a clumsy attempt to make Cool Britannia his own.

We don’t know what the Tory slogan will be for the next general election. They can’t call for change, and promising to cut the deficit would be comical when facing a third term.

For Labour, much will depend on the state of the party come that time, but there is no doubt in my mind that the people will be hungry for change. For an opposition party, the question is whether we’ll be able to meet that expectation?