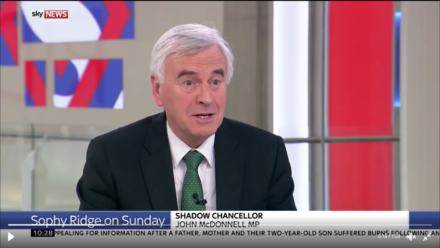 John McDonnell said today he could “weep” over anti-Semitism in the Labour Party as he called on Ken Livingstone to apologise for the offence caused by his comments about Hitler.

The shadow chancellor insisted Labour was “still the anti-racist party” he had joined but said Livingstone’s behaviour had left him “angry”.

McDonnell, who described himself as an “old ally” of the former London Mayor and Greater London Council leader, said they had fallen out a number of times but urged him to make amends for the offence he had caused.

“Ken Livingstone last year, I made it clear to him he should have apologised immediately and he didn’t …And I was quite angry about that,” he told Sky News’ Sophy Ridge on Sunday.

“I’ve known Ken, I was his deputy on the GLC, we’ve worked together, we’ve fallen out a number of times as well but I’m always straight with him, he should have apologised.

“This came about because my parliamentary private secretary Naz Shah made a statement which was appalling about sending Jews from Israel to America. I immediately asked her to stand down and she did. What did she do? She apologised immediately, realised the mistake that she’d made.”

McDonnell was making his first public comment about Livingstone’s suspension at the end of a turbulent week for Labour. Livingstone was handed an extended suspension by the national constitutional committee but that decision was condemned by MPs as far too lenient, as well as a key official, and Corbyn later criticised him and said the matter had been referred to Labour’s ruling national executive.

“I think there is anti-Semitism in our community and it will pervade all our institutions and we’ve got to root it out.  The shock to me is the figures, last year 1,300 anti-Semitic incidents, hate crimes reported across our whole community.

“Now Labour should be at the forefront of confronting that, instead we’re involved in this internal, well internal examination and exploration of what’s been going on in the last 12 months around Ken Livingstone. We’ve got to close that down and move on.”