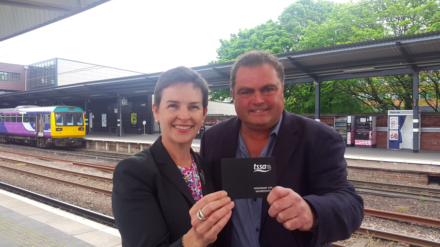 A Labour MP who acted swiftly in a bid to prevent London Underground passengers coming to harm during the Westminster terror attack has been honoured for her bravery by a leading rail union.

Mary Creagh, a former shadow cabinet minister, was today praised for her courage and quick thinking as the TSSA awarded her life membership.

Creagh, who is aiming to be re-elected in Wakefield, had been on her way to vote in the Commons chamber on March 22 when the attack occurred and was among those evacuated. Realising the risk to tube travellers who were walking through the barriers and on to the streets, she ran into Westminster station, entered the control room and asked staff to raise the alarm.

“MPs are often too often berated and too seldom praised for their public service, ” said Manuel Cortes, general secretary of the TSSA.

“Keeping the public travelling safely is at the heart of everything TSSA stands for and our tube members were both impressed by Mary’s quick thinking under duress and, moved by her overwhelming desire to help others stay safe in a moment of crisis. Mary’s humans action in the 82 second incident meant passenger protection procedures were implemented without delay before preventing passengers from walking into the Westminster danger zone whilst the danger was still present.”

Creagh was today awarded the honour following a unanimous vote by the union’s executive committee. She given the honour by Cortes in her constituency.

“I am delighted to be presented with honorary membership of the TSSA. Britain’s transport staff are unsung heroes, keeping us safe while we are on the move,” said Creagh.

“As well as recognising the role the emergency services played in dealing with the Westminster attack, I pay tribute to the staff at Westminster tube station whose swift actions protected the public. All of our thoughts, of course, remain with the victims of the attack and their families.”